As Obama further extends federal-employee benefits to same-sex partners, one of the world's most isolated spots grabs a moment of notoriety

Word of good news came this past week for gay federal employees stationed at Johnston Island in the Pacific Ocean, located 717 nautical miles west-southwest of Honolulu. 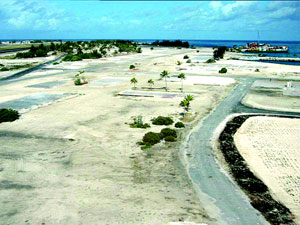 The island, technically an atoll, which once served as a military base where nuclear testing took place and biological weapons were kept, is one of the most remote places on the planet. According to the U.S. Fish and Wildlife Service (FWS), ”The atoll comprises four small islands (696 acres), which constitute the only land area in over 800,000 square miles of ocean.”

With a recent action by President Barack Obama, however, any gay employees stationed there will soon be able to receive the same extra payment for their same-sex domestic partners that a straight employee would receive for his or her spouse if the significant other is, understandably, not living on the atoll.

But why would the president specifically mention this far-flung spot in Pacific in his June 2 order of the extension of certain benefits to gay federal employees? Particularly when the island has not only no gay employees, but is absent any people whatsoever?

According to Susan White, project leader of the FWS Pacific Reef National Wildlife Refuge Complex, news of the order was an ”interesting revelation” to her because ”[t]here is currently no one stationed out at Johnston Island.” She added in a follow-up e-mail that the Air Force still controls the land, which has since been declared a national monument and ”eventual transfer” to FWS is being coordinated, but noted ”it is no longer an active base and no one is stationed there (except a few million seabirds).”

Just why Johnston Island’s staff of none was included is complicated. At best, it goes to show the true scope of the damage inflicted on the federal government’s ability to care for its workers and citizens so long as the Defense of Marriage Act remains on the books.

In 1996, Congress passed DOMA in the heat of the election season and nominally in response to the Hawaii case of Baehr v. Lewin, in which the Hawaii Supreme Court held that refusing to issue same-sex couples marriage licenses amounted to sex discrimination — unconstitutional under Hawaii’s constitution.

The relatively simple DOMA consists of a few short sections. The first names the act. The second purports to give states the right to refuse to recognize same-sex marriages performed elsewhere. The third section is the one that leads down the winding path that ends at Johnston Island.

It states: ”In determining the meaning of any Act of Congress, or of any ruling, regulation, or interpretation of the various administrative bureaus and agencies of the United States, the word ‘marriage’ means only a legal union between one man and one woman as husband and wife, and the word ‘spouse’ refers only to a person of the opposite sex who is a husband or a wife.”

On Sept. 21, 1996, when President Bill Clinton signed DOMA into law, no state offered marriage equality. Even Vermont’s groundbreaking civil unions wouldn’t be law for more than three years. But with Hawaii as a backdrop and with some companies and local jurisdictions beginning to offer same-sex partner benefits, the part of the bill ”defending” states from being ”forced” to recognize hypothetical same-sex marriages got most of the attention.

The impact of federal benefits being kept from same-sex couples took a back seat.

More than seven years later, the Massachusetts Supreme Judicial Court issued its decision in favor of marriage equality in Goodridge v. Department of Public Health, and the landscape changed dramatically. When same-sex couples began marrying in the spring of 2004, questions arose about how other states would handle those marriages.

Wherever federal law mentions ”marriage” or ”spouse,” the government is only referring to opposite-sex couples, DOMA commands. The end. No discussion.

As more states have joined with Massachusetts, the workability of this restriction looks more and more capricious. With marriage equality in D.C., where federal government workers are ever-present, the law takes on an even more contorted defense of a view not reflected by reality.

The response has been threefold.

The first is to try and get DOMA off the books. In 2009, Rep. Jerrold Nadler (D-N.Y.) introduced the Respect for Marriage Act, which would repeal DOMA and provide for a ”certainty provision” that would guarantee that same-sex couples legally married in one state would continue to have their marriage recognized by the federal government regardless of where they move. The bill currently has 111 co-sponsors, but there is no companion measure in the Senate and congressional observers do not expect the measure to be passed into law in the near future.

The second way to respond to DOMA is to take it to court. Although no challenges to DOMA have been successful thus far, a targeted, partial challenge to DOMA – brought by the same people who succeeded in Goodridge – challenges only the third section of DOMA, the federal definition of ”marriage” and ”spouse.” The federal district court in Boston heard arguments in the challenge in May, but any decision in Gill v. Office of Personnel Management is likely to be appealed and the case could possibly find its way up at the Supreme Court. The prominent challenge to Proposition 8 in federal court in California, meanwhile, does not directly take on DOMA, but any ruling that strikes down California’s marriage prohibition likely would have some impact on DOMA.

The third is to find ways around DOMA. In legislation, this is being attempted by creating a new status – like the ”domestic partnerships” referenced in the Domestic Partnership Benefits and Obligations Act or the ”permanent partner” referenced in the Uniting American Families Act – so as to avoid the words ”marriage” or ”spouse.” Both of these bills, also, have more sponsors than the Respect for Marriage Act and have been introduced in the Senate (in the case of DPBO) or discussed by senators as meriting inclusion in larger pieces of legislation (in the case of UAFA).

With existing laws, the way around DOMA – and this leads to that atoll in the Pacific – is to find parts of current law where, in a legal way, DOMA’s restriction can be given a wink and a nod – before being ignored.

As Obama put it in the memorandum to agency heads on June 2, ”Although legislative action is necessary to provide full equality to LGBT Federal employees, the agencies have identified a number of benefits that can be extended under existing law.” Obama announced that same-sex domestic partners of federal employees, and, in some circumstances, the children of those employees’ partners would be eligible for employee-assistance programs, child-care assistance and some Family and Medical Leave Act-related programs.

Then it got a little more technical, and Obama added that same-sex partners of federal employees in certain areas of government would be eligible for additional benefits. Those included noncompetitive appointments to certain civil-service positions, advance payments for evacuation from dangerous areas abroad, a presumption that they have an insurable interest in a federal retiree’s annuity payments and – for one whose partner is hypothetically stationed on Johnston Island – that extra maintenance payment.

Why are these benefits open to same-sex partners of federal employees while other wide swaths of federal benefits are not?

It turns out that, across federal law, the same language isn’t always used. Although one might hope that federal law would use consistent terminology, that’s more often the exception than the rule.

In the case of the evacuation payments, for example, the statute in question allows for the payments to include the employee and his or her ”dependents or immediate family.” Because the law itself uses neither ”marriage” nor ”spouse” and the statute does not further define the terms, DOMA does not restrict the provision of benefits to exclude same-sex partners.

In the federal employees’ health-insurance provision in federal law, however, ”member of family” is defined by statute as meaning ”the spouse of an employee … and an unmarried dependent child under 22 years of age.” DOMA, therefore, prohibits giving those benefits to a same-sex partner. Because that restriction prevents the government from giving equal benefits, health insurance is one of the primary areas of employees’ benefits addressed in the DPBO.

Looking at the language granting that extra payment for those phantom Johnston Island employees, it provides that the payment can be given if the ”employee’s spouse or dependents, or both,” are living somewhere other than Johnston Island. The president’s memorandum states that ”employees’ same-sex domestic partners qualify as dependents,” but then notes that they are ”subject to any limitations applicable to spouses.” Same-sex couples, then, aren’t legally being treated as spouses but are instead being treated as dependents, in an attempt to avoid DOMA’s restriction. The Justice Department apparently determined that this convoluted method of extending the benefit does not conflict with DOMA.

Since taking office, first with the memorandum of June 17, 2009, granting some same-sex partner benefits to federal employees and now with the extension of additional benefits in the June 2 memorandum, the Obama administration appears to be combing through federal law for areas where the language used to provide benefits to ”family” or ”dependents” of federal employees does not specifically restrict the benefits to the spouse or spouse and children of the employee.

What’s more, where federal regulations – but not the underlying statute – specify that ”family” or ”dependents” are defined as or presumed to be only spouses or children, the June 2 memorandum appears to require that agencies take steps to change the relevant regulations to include same-sex partners. Office of Personnel Management Director John Berry further established that this was so in a follow-up memorandum, writing to agency heads, ”Changes in agency regulations, policies, contracts, negotiated agreements, or other documents … may be necessary to implement the President’s direction.”

Additionally, per Obama’s memorandum, agencies now will have an ongoing obligation to add equivalent benefits for same-sex partners of federal employees as they are found or established, ”to the extent permitted by law.”

Despite these steps, changes and ongoing obligations, the ”to the extent permitted by law” part is key. The large DOMA roadblock cuts off most of the obvious pathways forward, which Obama’s statements suggest he understands. In his 2010 proclamation for Lesbian, Gay, Bisexual, and Transgender Pride Month, he wrote of the work that remains ahead, ”That is why we must give committed gay couples the same rights and responsibilities afforded to any married couple, and repeal the Defense of Marriage Act.”

Whether they are 717 miles west-southwest of Honolulu on a deserted island in the Pacific, or down the street from the White House at the D.C. Courthouse, same-sex couples – and public officials – will continue to face these complications until Congress or the courts take action to remove DOMA from the nation’s laws.