Home / News + Politics / Poliglot / After Dismissal, Questions Remain — And Get Equal Makes a Move on ENDA

After Dismissal, Questions Remain — And Get Equal Makes a Move on ENDA 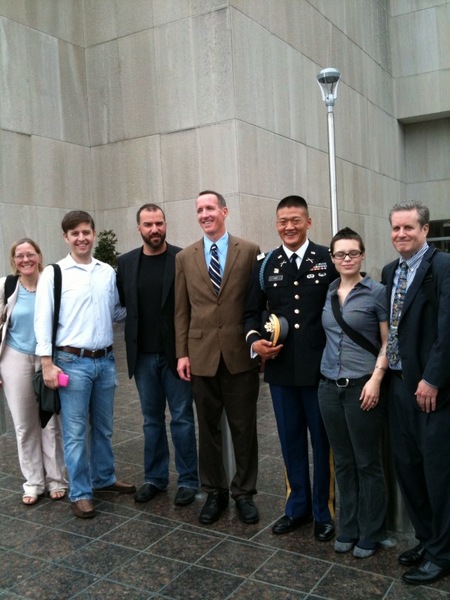 Although the charges were dismissed against Lt. Dan Choi and James Pietrangelo on Wednesday morning (as Metro Weekly‘s Yusef Najafi reports here), questions remained about why they were abruptly dropped moments before trial.

Those questions, though, aren’t the focus for Get Equal.

Though Choi and Pietrangelo were joined outside the courthouse by their lawyers, communications consultant and Get Equal activists (pictured), Get Equal already had begun its next effort — a pushback against inaction on ENDA.

The organization sent an email to its mailing list on Wednesday morning, asking “Which Democratic leader should we hold accountable next for workplace protections for LGBT people?”

Who do you think we should hold accountable?

* Should it be … Pelosi, who has promised us since May that a vote will happen by the second week of June? [1]
* Should it be … Frank, who said “we will get this [ENDA] done fairly quickly,” but then called GetEQUAL’s pressuring tactics “immature” and “tacky”? [2]
* Should it be … Miller, who heads the House Education and Labor Committee and has said via a spokesperson “he intends to get to it [ENDA] very shortly?” [3]
* Should it be … Reid, who said that he will “fight hard for the votes to get it passed,” but who has failed thus far to pressure the last few Senators for their votes? [4]

Meanwhile, Choi, via his Twitter feed, was moving on quickly from his rejoice at the dismissal — “Victory for truth today! Government drops case against us.” — to a call to action — “Bastille Day commemorates an oppressed community rising up to liberate the imprisoned among them. “

[PHOTO: Choi and Pietrangelo are joined by their attorneys, communications consultant and Get Equal activists following the dismissal of the man’s cases on Wednesday morning, July 14. (Photo by Chris Geidner.)]