Home / News + Politics / Poliglot / A Mile Away, a World Apart

A Mile Away, a World Apart 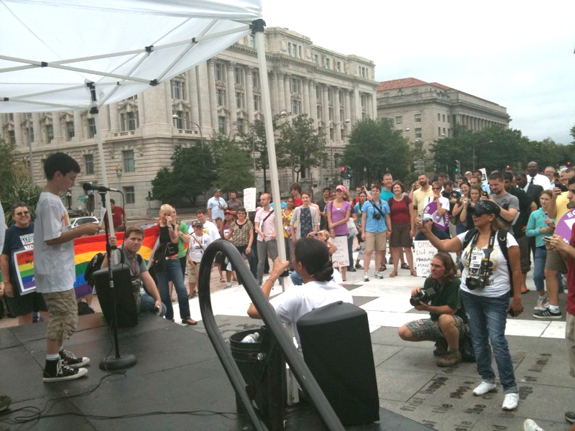 The crowd gathered at the National Organization for Marriage’s rally on the lawn near the U.S. Capitol on Sunday, Aug. 15, grew to about 200 people – mostly because of several buses that arrived carrying supporters of NOM’s message.

Before the arrival of the buses, however, the crowd at NOM’s final stop on its “Summer of Marriage” tour consisted of a mix of those supporting NOM’s rally, same-sex marriage activists countering the rally with protest signs and members of the media.

A little more than a mile away, however, the crowd was larger and unified at The Big Commit – the District’s event organized to counter NOM’s tour stop.

Although D.C. councilmembers David Catania (I-At large) and Phil Mendelson (D-At large) spoke to the crowd about the success of the District’s same-sex marriage legislation, it was Arkansas’s Will Phillips – the elementary school student who made headlines by refusing to pledge allegiance to a country that discriminates against gay people – who won over the crowd, telling NOM that change is coming with his generation (watch Metro Weekly‘s video of the speech).

Despite the crowd at NOM’s Capitol event – and a fiery speech from Bishop Harry Jackson (watch Metro Weekly‘s video of the speech) – one person was noticeably missing: Maggie Gallagher. Even though NOM’s website lists its chairman, Gallagher, as one of the speakers of the event, she was nowhere to be found on Sunday.

When asked by Metro Weekly about Gallagher’s absence, Brian Brown, president of NOM, said Gallagher was initially listed as one of the speakers, but there was a conflict in her schedule. “She’s on vacation,” Brown said, adding that he did not know where Gallagher was taking her vacation. 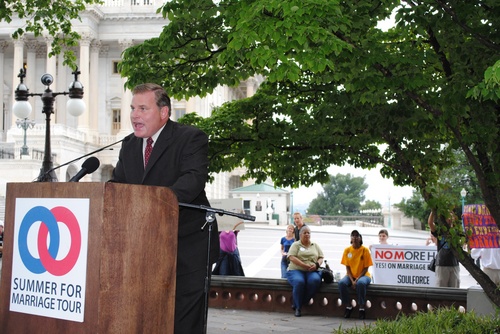