It’s deja vu all over again for California and across the nation, as the court released word that the decision in Perry v. Schwarzenegger will be handed down later today, Wednesday, August 4.

So, what does this mean?

Here are the eight basics (with only a little cheating) on what’s going to happen and what to look for when it does happen. This is a primer related to the lawsuit and the legal decision; I will leave for other times and other posts any political or “movement” implications or consequences.

U.S. District Court Judge Vaughn Walker, the chief judge of the U.S. District Court for the Northern District of California, held the trial in January and June of this year in the federal courthouse in San Francisco. He will not be announcing his decision from the bench. The decision will simply appear online between 1 p.m. and 3 p.m. PDT (4 p.m. and 6 p.m. EDT) today. A limited number of paper copies also will be made available at various California federal courthouses.

2. Why is this happening?

Chad Griffin, a politico with Hollywood ties, convinced some heavy hitters — including Oscar-nominated director Rob Reiner and Oscar-winning Milk screenwriter Dustin Lance Black — that more needed to happen in the wake of the passage of Proposition 8 than Equality California and the trio of legal groups — the ACLU, Lambda Legal and NCLR — were willing to do to fight the state constitutional amendment banning same-sex marriages. The group — which became the American Foundation for Equal Rights — recruited Ted Olson, a conservative, and David Boies, a liberal, to serve as the lead lawyers in a federal court challenge to the amendment. After a trial that lasted three weeks in January and concluded with closing arguments in June, the decision is set for today.

3. What is going to happen later today?

Today, regardless of the decision, not much — in terms of actual change — will likely happen. Because both sides have made clear — and Judge Walker has acknowledged — that they plan to appeal should they lose on Wednesday, it is likely that a temporary stay would be granted, which would halt the enforcement of the ruling until an appeal can be heard by the U.S. Ninth Circuit Court of Appeals. AFER’s spokesman confirmed to Metro Weekly that the Proposition 8 proponents, who intervened in the case to oppose the plaintiffs, have filed a conditional motion to stay the trial court decision pending the outcome of the appeal.

4. What could the judge decide?

Judge Walker has been asked to rule on whether the U.S. Constitution prohibits the enactment of California’s Proposition 8. Although Walker could decide that the amendment is constitutional, the questions he asked at the closing arguments lead me to believe that is unlikely. If that’s correct, then it is the scope of Judge Walker’s legal conclusions that will be the key element to watch tomorrow. The other key area to watch will be the specificity of the findings of fact.

5. The findings of fact?

Court decisions, whether aided by juries or, like here, handled without a jury, involve two types of decisions. One type are findings of fact; the other are conclusions of law. On appeal, the conclusions of law are considered de novo, or considered anew — without deference to the decision below. The judge or jury who makes the findings of fact, however, is given deference because factual determinations are aided by the direct benefit of the judge or jury at trial. On appeal, Judge Walker’s findings of fact will only be disturbed if the appellate court finds any to be clearly erroneous.

As such, it will be important to see what points Judge Walker advances — regardless of the legal conclusions — in the findings of fact because they are far more likely to “stick” all the way up to and including at the U.S. Supreme Court, should it accept the case eventually.

6. The scope of the ruling?

A. Under equal protection, the scrutiny of classifications based on sexual orientation

One of the first issues for the judge to decide is what level of scrutiny applies to classifications — such as Proposition 8 — based on sexual orientation. The plaintiffs argued that a heightened scrutiny should apply; the proponents argued that rational basis would suffice. If Judge Walker decides that heightened scrutiny should apply, then it would be more difficult to uphold Proposition 8 as constitutional because it would have to be proven to serve an important governmental objective and be substantially related to that objective. If a rational basis would suffice, then the amendment merely needs to be found to be rationally related to a legitimate government interest.

The discussion at trial about the political powerlessness of gays and lesbians, the history of discrimination and the immutability of sexual orientation all are factual considerations that will go into Judge Walker’s conclusion about the level of scrutiny under which the case will be considered.

B. Under due process, the definition of “marriage,” in terms of its status as a fundamental right

The U.S. Supreme Court has found marriage to be a fundamental right previously, and the parties in this case aren’t asking Judge Walker to change that. They do, however, differ on their view of what the definition of “marriage” is. As has played out in ballot campaigns, the proponents argue that the very definition of marriage means only a man and a woman. As Olson put the plaintiffs’ argument at the closing, it “isn’t changing the institution of marriage. It is correcting a restriction based upon sex and sexual orientation.” In many ways, the way marriage is defined here almost inevitably leads to one result or the other.

7. What impact will the specific circumstances in California relating to the passage of Proposition 8 have on the case?

The California Supreme Court had held in early 2008 that same-sex couples could not be discriminated against under the state’s marriage laws. This decision led to 18,000 same-sex marriages — and the passage of Proposition 8 in November 2008. These specific facts (along with literature related to the Proposition 8 campaign), the plaintiffs argue, make California a nearly unique or unique situation when it comes to proving that the passage of the amendment is based on animus — or hatred. If so, the plaintiffs argue, then this case is similar to Romer v. Evans, in which the U.S. Supreme Court held that animus alone could not be a legitimate basis for passing a law that prohibited the ability of Colorado cities and other political subdivisions from passing sexual orientation nondiscrimination ordinances. This is the primary basis under which I would expect to see the law struck down if it is struck down under rational basis.

8. What about the Defense of Marriage Act?

Finally, any mention of the federal law, although not technically at issue in the case, is sure to raise eyebrows all across the country. Judge Walker asked about DOMA in written questions to the parties before the closing arguments, asking whether he could strike down Proposition 8 and not address DOMA. Although the parties did not ask for him to address DOMA, it obviously will be noteworthy should he decide to do so. 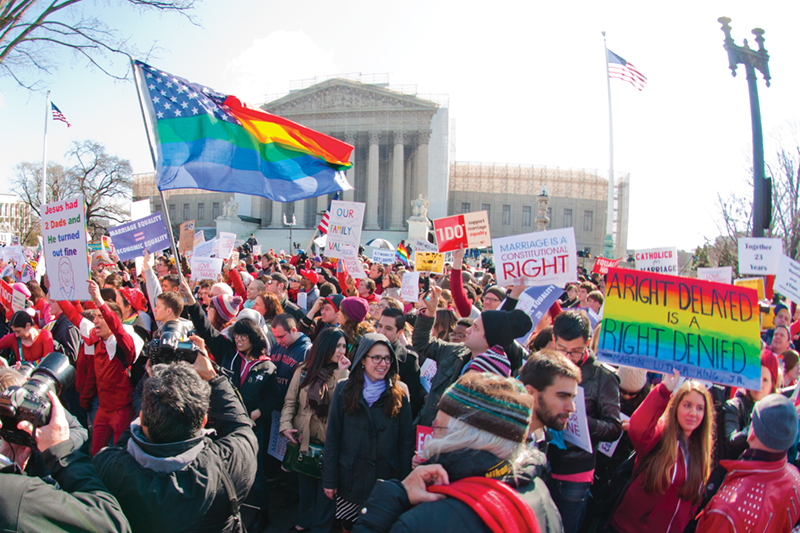