NOM's final stop of its Summer of Marriage took place in the District on Sunday, where it was countered by The Big Commit – and the small but powerful Will Phillips

Brian Brown, the National Organization for Marriage’s president, took the stage of a rally scheduled for 2 p.m., on Sunday Aug. 13 with an announcement: ”We’re running a little late,” he said, adding that buses carrying supporters of NOM were still on their way to the final event of the organization’s ”Summer of Marriage” tour. 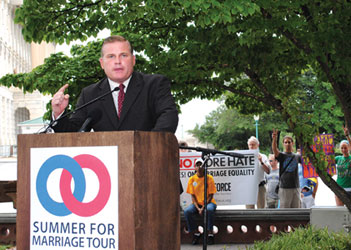 Once the buses arrived, though, Brown explained their mission for the event on the east grounds of the Capitol.

A little more than a mile away, Will Phillips – the Arkansas elementary school student who made headlines this past year when he refused to pledge allegiance to a country that discriminates against gay people – spoke. Barely tall enough to be seen in the crowd at ”The Big Commit,” Phillips was loud and clear when he told the audience at the Freedom Plaza rally that served as a counterpoint to NOM’s event of his view for the future.

”Mark my words, NOM and those who oppose equality,” Phillips said. ”There is a storm coming. My generation will be the change you fear most in the world.

”We will have equality. We will change the world. My name is Will, and I’m putting you on notice.”

Down at the NOM rally, Bishop Harry Jackson – the senior pastor of the Hope Christian Church in Beltsville, Md., who fought the District’s marriage-equality law from its introduction – served as the counterpoint for Phillips’s message on Sunday.

”A minority is imposing its will … [and] they’re going to tell you that their side will win,” Jackson said. ”I’m here to tell you that all they are doing is acting like the bullies that grew up in the ghetto.”

Riling up the audience at the NOM rally with a chant to ”let the people vote,” Jackson said that it is time to ”play musical chairs” with D.C.’s elected officials.

Two of the most prominent of those elected officials – D.C. City Councilmembers David Catania (I-At large) and Phil Mendelson (D-At large) – didn’t sound threatened by Jackson or NOM as they took to the stage at The Big Commit.

Catania – the first out gay member of the City Council and the member who introduced the marriage-equality bill in 2009 – began, telling the crowd, ”This city has made all of us so proud by continuing the rich tradition that we have long had in this city of fighting for equality.”

Mendelson, speaking to Metro Weekly after taking the stage, said, ”This event is important because it is a counter-event to NOM’s efforts to continue to argue for discrimination.”

”This is a difficult issue for many people in the country, who don’t see their own prejudice. And I hate to put it that way,” Mendelson said. ”But, if you look back at other civil-rights struggles, people strongly held their prejudicial views and could not see. An event like this is important to continue to break down those barriers.”

City Council candidate Delano Hunter, however, did attend the NOM rally. Hunter is challenging Councilmember Harry ”Tommy” Thomas Jr. (D-Ward 5), who voted for the marriage-equality bill this past fall.

Despite the crowd bused in for NOM’s event and the fiery speech from Jackson that even found its way to a mention of the book Heather Has Two Mommies, one person was noticeably missing from the Capitol grounds: Maggie Gallagher.

”She’s on vacation,” Brown said, adding that he did not know where Gallagher was taking her vacation.

Alveda King, the niece of Martin Luther King Jr., who had attended NOM’s event that took place on Aug. 7 in Atlanta, was originally scheduled to attend its District event on Sunday but, like Gallagher, was not in attendance.

In a statement released on NOM’s website, King wrote: ”I wish I could be there with you today.

Despite the focus of marriage-equality supporters at The Big Commit, some protesters went to the NOM rally. A coalition of activists organized by Queer Uprising, for one, staged what they called a ”Homophobia Kills Die-In.”

As NOM’s rally continued, the group walked with rainbow flags in front of the U.S. Capitol with blown-up photographs of four people killed within the past three years as a result of homophobia. One of the victims was Roy Antonio Jones III, a 16-month-old baby who was killed Aug. 1 by a man who police say ”told his parents that he was trying to make the toddler ‘act like a boy instead of a little girl,”’ according to The Southampton Press.

Several of the protesters, including Vienna Hagen from Albany, N.Y., were asked by U.S. Capitol Police to leave or refrain from demonstrating, as the group of marriage-equality supporters grew to include more than 20 people, the officers claimed. That is considered a demonstration, and a permit is required to hold a demonstration in front of the U.S. Capitol.

Hagen flew to Washington to attend NOM’s rally and The Big Commit with a sign that she displayed on Sunday.

”Marriage is a right,” the sign read. ”Discrimination isn’t.”