In 2006, Jim Webb, the former Navy secretary to President Reagan, became a Democrat and ran to unseat Sen. George Allen (R-Va.), in large part based on Webb’s opposition to the war in Iraq.

As was often noted, Webb’s son, Jimmy, was in the Marines and was sent to Iraq during the campaign. Webb kept that news front and center with the physical symbol of the shoes he chose to wear. As The New York Times reported at the time, ”[Webb] wears his son’s old combat boots on the campaign trail, in tribute to him and ‘all the people sent into harm’s way.”’

Webb, the Times noted, ”tells his audiences that the idea came from his son.”

On Friday morning, Sept. 17, another group of veterans had an idea to share with now-Sen. Webb (D-Va.). 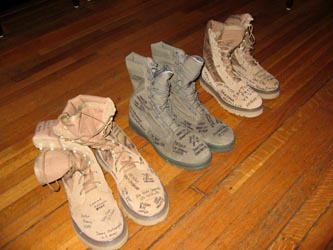 Boots signed by former servicemembers impacted by the “Don’t Ask, Don’t Tell” policy were left at the office of Sen. Jim Webb (D-Va.) by members of Get Equal on Friday, September 17.
(Photo by Ward Morrison for Get Equal)

They too thought that boots could send a message. This time, though, the message was about the military’s ”Don’t Ask, Don’t Tell” policy.

Webb, who voted against the amendment aimed at repealing DADT when the Senate Armed Services Committee passed the amendment to the National Defense Authorization Act in May, had been the target of criticism and persuasion in the months since.

As people and organizations prepared for the Tuesday, Sept. 21, floor vote in the Senate on whether to proceed on consideration of the NDAA, a Webb spokesman reiterated that – despite Webb’s committee vote – the senator’s inclination was still unknown, writing to Metro Weekly on Sept. 17, ”He has not indicated how he intends to vote on this in the future.”

Cpl. Evelyn Thomas was one of several former servicemembers who went to Webb’s office Sept. 17 as part of an action organized by Get Equal, H.E.R.O. and the Sanctuary Project. Thomas was arrested earlier this year for handcuffing herself to the gate in front of the White House in protest of perceived inaction by President Obama to repeal DADT.

Thomas spoke with Metro Weekly about her visit to Webb’s office, saying that they went ”to remind him how the DADT impacts on LGBT servicemembers” and ”how it’s essential for him to vote for” the NDAA including the DADT repeal language.

Thomas said that she and the others met with Webb’s ”military liaison,” who, she said, ”tried to force us, in a diplomatic way, out of the office. But we stood our ground.”

Speaking of the glass case in his office that now contains his son’s boots that Webb wore during the campaign, Thomas said, ”He wore his son’s combat boots … to show his opposition to the Iraq war.”

They came to Webb’s office wearing boots of their own, boots signed by servicemembers who had been affected by DADT. ”We wore those boots in solidarity for servicemembers who must compromise their integrity to serve,” she said, sharing that they then took off the boots and left them at the foot of the case. ”We want him to walk in their shoes.”

Of their action that Friday, Thomas said of Webb, “We were just following his lead.

“He did that when he wanted to send a clear message to President Bush about his opposition to the war in Iraq. … He stood up for something he believed in; we’re standing up for something we believe in.”

On Tuesday, Sept. 21, Webb was forced to cast a vote what he believed in.

Four years after The New York Times chronicled that Webb wore his son’s boots for ”all the people sent into harm’s way,” he joined with nearly all of his Democratic colleagues in voting to proceed to debate on the bill that could lead to the end of DADT.