In a field of 52 contestants competing for the 2011 Miss Gay America title in Columbus, Ohio, earlier this month, it was Coti Collins, Miss Gay D.C., who took the No. 1 spot.

”All of the contestants were very well prepared,” says Robert York, promoter of the annual Miss Gay D.C. pageant, usually held every spring. 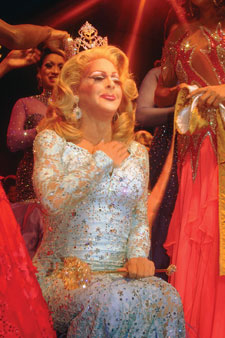 ”Miss Gay D.C. came out on top because she was really focused and determined to win,” York adds. ”Coti has been a name in the community for man, many years, just with her experience and leadership.

”This was the 39th crowning of Miss Gay America, … the oldest pageant in female impersonation. It’s great to see so many competitors and also be there to see friends and support everyone that’s competing for Miss Gay America.”

While York lauds Collins, performed by David Lowman, he says he was not expecting the win.

”It’s always a nice surprise to see someone who has perfected the art form stand there and be crowned our symbol of excellence for the next 365 days.”