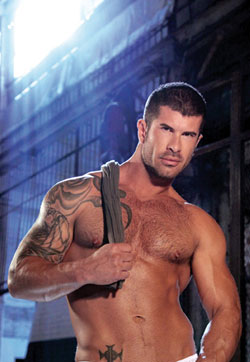 And because of his experience and relationships, directors, including Chi Chi LaRue, allowed Killian pretty much from the get-go to call his own shots, as well as to choose his scene partners. In other words, he can live out his fantasies. He’s starred in nearly a dozen films for LaRue’s Rascal Video Productions, Falcon, Raging Stallion and Michael Lucas.

”I’ve been dancing pretty much my whole life,” he says. The Monterrey, Calif., native started go-go dancing at gay clubs before he even graduated high school, which then continued while in college at the University of California-Santa Cruz. He eventually started doing erotic-tinged performance shows with backup dancers at circuit parties, including D.C.’s Cherry in 2003. But on stage he’s always been clothed in some fashion — even during ”full-on sex” shows, such as at San Francisco’s Folsom leather party last month. ”I had chaps on and a harness and a jock — a lot of costume,” he says. Which is why his appearance this weekend at Secrets is noteworthy.

”Secrets is probably going to be the first club I’ve ever danced at fully naked,” he says. Of course, the exhibitionist is more excited than worried, noting, with a laugh, ”After doing movies it’s not a big deal.”