The cast of Modern Family was recognized with the Human Rights Campaign’s National Arts and Culture Award at the organization’s 14th annual National Dinner on Saturday, October 9, 2010, at the Washington, D.C. convention center.

Eric Stonestreet and Jesse Tyler Ferguson — better known to Modern Family fans as gay couple Cam and Mitchell — accepted the award on behalf of the cast and crew.

“The fact that Cameron and Mitchell have been embraced by viewers as an equal addition to typical worrisome child-rearing couples everywhere is a really beautiful thing,” Ferguson said during their remarks. 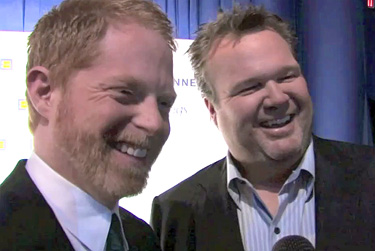 Prior to the start of the HRC National Dinner, Metro Weekly’s Chris Geidner spoke for a few moments with Eric Stonestreet and Jesse Tyler Ferguson, who play gay couple Cam and Mitchell on ABC’s hit comedy Modern Family. Ferguson, in particular, talks about how he, as an out gay man, views the series and his on-screen family.

The comedy, now in its second season, was recognized with the Human Rights Campaign’s National Arts and Culture Award at the organization’s 14th annual National Dinner on Saturday, October 9, 2010, at the Washington, D.C. convention center.