Ben Carver is not talking to the press.

But in a nearly 1,700-word Oct. 5 blog post on BenCarver.com, the D.C. resident describes how he fought back against two assailants who allegedly tried to mug him inside New York City’s historic Stonewall Inn gay bar earlier this month. 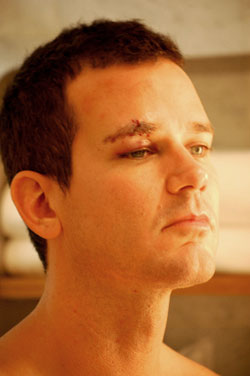 According to Carver’s account, the two men asked him for money in the bar’s bathroom after calling him a ”faggot.” When Carver said he did not have cash, and that if he did he would not hand it over, violence ensued. Two men battled Carver in a small space as he fought back.

”The action happened very quickly so I can’t recall every movement, but needless to say it was very violent as I used any leverage I had to … get free of Orlando,” Carver wrote.

”I remember there were three distinct series where Matthew punched my head repeatedly, separated by the moments where our mutual crashing impeded his ability to land punches. All told, I believe he punched my head about a dozen times.”

New York City Police apprehended the men, Matthew Francis, 21, and Christopher Orlando, 17, shortly after the incident and, according to the New York Daily News, both men are being charged with a hate crime. Days after the incident, members and supporters of the LGBT community gathered at the tavern, a historic landmark as the site of the 1969 riots credited with helping start the modern movement for LGBT equality.

Sharon Stapel, executive director of the New York City Anti-Violence Project, says the organization is disturbed by the incident.

”What we know is this kind of violence impacts LGBT people every day, and in all places,” says Stapel. ”What we need to do is come together as a community, as a society, and denounce not just the physical violence that we’re seeing, but also the anti-gay rhetoric that creates this culture of violence.”