''You're Going to Hell'' — But First, the Supreme Court

On Wednesday, the justices considered whether the anti-LGBT Westboro Baptist Church's protest of a soldier's funeral was protected by the First Amendment

Matthew Snyder, who attained the rank of a lance corporal in the U.S. Marine Corps, died on March 3, 2006, in the Al Anbar Province of Iraq. 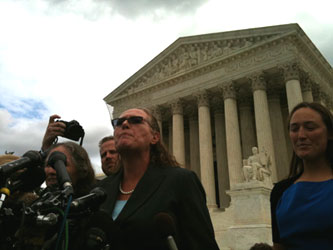 Margie Phelps of the Westboro Baptist Church speaks to reporters outside the U.S. Supreme Court on Wednesday
(Photo by Chris Geidner)

One week later, members of the Westboro Baptist Church, which is led by Fred Phelps, Sr., stood outside of Snyder’s funeral with signs proclaiming — among other things — “Thank God for Dead Soldiers,” “God Hates Fags” and “You’re Going to Hell.”

Although WBC member and lawyer Margie Phelps repeatedly referred to the religious entity she represented Wednesday morning before the U.S. Supreme Court as “a little church,” the court’s nine justices — including the newest justice, Elena Kagan, who first took to the bench on Monday — were asking big questions about the First Amendment, public debate and “the right to be let alone.”

Al Snyder, Matthew’s father, took his case to the Supreme Court, asking the justices to overturn the decision of the U.S. Court of Appeals for the Fourth Circuit holding that the First Amendment prevents Snyder from bringing a lawsuit for intentional infliction of emotional distress against the WBC for protesting outside his son Matthew’s funeral.

The case, which centers around the religious group behind the godhatesfags.com website and who also protested outside of Matthew Shepard’s funeral in 1998, presents the justices with a question about whether the First Amendment protection of, as Justice Sonia Sotomayor put it, public commentary about public figures — which the court previously held is protected — also applies to public commentary about private figures.

In an earlier case, Hustler magazine in 1983 published a parody of an ad campaign of the time suggesting that Jerry Falwell’s “first time” took place during — as the Supreme Court described it — “a drunken incestuous rendezvous with his mother in an outhouse.” The court there addressed the scope of “First Amendment limitations upon a State’s authority to protect its citizens from the intentional infliction of emotional distress.” It concluded that the First Amendment protected commentary such as Hustler‘s satirical “ad” when a matter of opinion was expressed and the opinion was not making a statement of fact that is able to be proven to be false. Because it involved Falwell, however, the case was decided in reference to “public figures and public officials.”

When questioning Sean Summers, the attorney for Snyder, Justice Ruth Bader Ginsburg asked for an example of when “conduct is lawful” — no one claims that the WBC protest broke any laws — “yet there is an award of damages,” as was ordered in Snyder’s lawsuit.

Summers said he was “not aware of any case.”

On the other side, though, Phelps argued to the justices that Snyder’s decision at the time to answer a reporter’s questions about his son’s death and to post the information about the funeral made him a public figure — and, additionally, the funeral a public event — such that the Hustler case standard should apply with no need to expand it to private individuals. She also argued initially, in response to a question from Justice Samuel Alito, that no claim for intentional infliction of emotional distress could be based on speech unless the speech could be proven to be false.

She later was unwilling to answer a question from Chief Justice John Roberts about whether her case would succeed if a person had done nothing to put himself or herself into public debate, following up on a question from Alito about a hypothetical grandmother leaving the grave of a grandson killed in war who was set upon by someone sending similar messages to the ones shared by WBC outside of Snyder’s funeral.

Eventually, responding to Kagan, Phelps stated, “The umbrella that you get protection for is that this is speech of public concern.” Justice Anthony Kennedy questioned this, saying that would not, in reality, be a “limiting factor” because everything could be a matter of public concern.

Justice Stephen Breyer, ever the professor, told Phelps he was “looking for a line” that would “allow this [type of lawsuit] to exist” but “not allow interference with public comment.”

Later, when Sotomayor went back to the question about how the case should be decided if the justices decide that Snyder was a wholly private figure, Phelps responded, “I don’t know that I can give you a definitive answer as you frame it.”

Although she maintained the decorum expected of lawyers appearing before the court during the arguments, Phelps did move into the more vitriolic language expected from members of the WBC when speaking with reporters after the arguments.

Saying at one point for reporters not to pretend God isn’t mad because the nation “put same-sex marriage in and turned [the country] over to the fags,” Phelps concluded by singing to reporters with the other WBC members in attendance about how people are “going straight to Hell on a crazy train.”

As Al Snyder left the court with Summers, he spoke briefly with Metro Weekly about the LGBT community’s familiarity with Fred and Margie Phelps and the WBC’s protests. He said he’s thankful for the kindness shown to him by the LGBT community: “They’ve been great supporters.”

On the way to their cars, Snyder, Summers and Kansas Attorney General Steve Six (D) were greeted on the grounds of the U.S. Capitol by U.S. Capitol Police Officer Keith Atkins.

Atkins, in a brief and informal ceremony, presented Snyder with a flag dedicated to the “countless sacrifices made by Lance Corporal [Matthew] Snyder … a brave Marine and great American.” Atkins added, as he presented the flag to Snyder, “I put ‘Semper Fi’ on there, because I know he would want that.”

Asked what circumstances brought up his presentation Wednesday, Atkins told Metro Weekly that he’d met Al Snyder when he was in Washington visiting the Capitol earlier in the year.

“We just struck up a nice conversation, and he told me what had happened,” Atkins said. “Paying my respects, I wanted to fly a flag in his son’s honor — that’s why I did that.”

The flag, Atkins said, flew over the U.S. House of Representatives earlier Wednesday.

But the group's chants were soon overpowered when the Foo Fighters' disco alter egos The Dee Gees appeared on the back of a truck, NME reports.

Dressed in full '70s garb, the band -- complete with backing singers -- pulled up alongside Westboro protesters and front man Dave Grohl proceeded to address them.