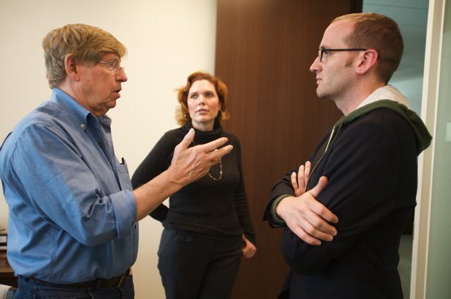 [Photo: Attorney Ted Olson speaks to Chad Griffin (right) and Kristina Schake before the start of the Perry v. Schwarzenegger trial challenging the constitutionality of California’s Proposition 8. (Photo by Diane Walker for AFER.)]

One of the co-founding board members of the organization bringing the historic challenge to California’s Proposition 8, Kristina Schake, is resigning from the American Foundation for Equal Rights board at the end of the month to start a new job at the White House on Dec. 6 — the same day that the U.S. Court of Appeals for the Ninth Circuit is to hear the appeal in Perry v. Schwarzenegger.

In a news release this morning, the White House announced that Kristina Schake is leaving California’s Griffin-Schake public relations firm to come on as a special assistant to the president and communications director to First Lady Michelle Obama. Schake previously served as the senior communications strategist to California First Lady Maria Shriver.

Chad Griffin, the AFER board president, said in a statement on Schake’s new position, “She’s one of the most intelligent and valuable resources the equality movement has ever seen.”

The White House statement mentioned the work Schake and her firm have done to “help[] change California’s political landscape on … civil rights,” although AFER and the challenge to Proposition 8 were not specifically mentioned. It also stated that Schake “is a seasoned expert in helping major foundations, non-profit organizations and civic leaders bring about critical social change through policy, legislative, social marketing and media initiatives.”

In the White House statement, First Lady Michelle Obama touted Schake’s “extensive work throughout her career on child nutrition and community health issues,” as well as “her experience as part of a military family.”

“I’m thrilled to welcome Kristina to the team. Kristina brings a wealth of expertise that I know will make her a tremendous asset in the East Wing,” Michelle Obama said. “I look forward to working with Kristina on these efforts and more in the months and years ahead.”

AFER’s statement noted that Schake would be resigning from the AFER board effective Nov. 30, and Griffin praised her contributions to the effort.

“Kristina was instrumental in the conception of the American Foundation for Equal Rights and she’s played a key role in every strategic success we’ve had as an organization,” he said in the statement. “We’re sad to see her go but, are extremely proud of where she’s headed.”

Neither The Washington Post nor The New York Times‘s reports on the news mention Schake’s affiliation with AFER or role in fighting Proposition 8.

[UPDATE @ 10:40 PM: In response to a request for comment about Schake’s work challenging the constitutionality of Proposition 8, White House spokesman Shin Inouye wrote to Metro Weekly on Monday afternoon, “The White House is pleased to have Ms. Schake join our staff. She was hired as she was the most qualified person for the position.”]