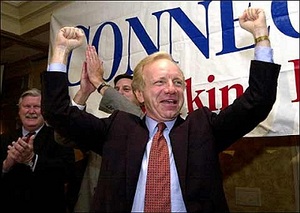 On Wednesday evening, Nov. 17, some were questioning Greg Sargent’s report that there could be 60 votes in the U.S. Senate to overcome a filibuster of the National Defense Authorization Act if it contains the amendment aimed at repealing “Don’t Ask, Don’t Tell.”

On Thursday, surrounded by Democratic pro-repeal senators, one-time Democratic vice-presidential candidate Sen. Joseph Lieberman (I-Conn.), said he was “confident” that there were “more than 60 votes prepared to take up the defense authorization with the repeal” — with the caveat that the votes were there “if only there will be a guarantee of a fair and open amendment process.”

As The Advocate‘s Kerry Eleveld went on to detail, Lieberman and the dozen Democratic members “seemed intent on urging the Democratic leadership to allow enough room in the Senate schedule for a debate that would be acceptable to Republicans.”

It was only hours later, on Thursday evening, that reports began circulating that Sen. Lisa Murkowski (R-Alaska) had told a local news station — in the reporters’ words — that Murkowski “would not vote against a bill that had that repeal in it.” Although her spokesman later added some nuance and conditions to that characterization, the conditions — reported (with some questions) by Igor Volsky at the Wonk Room — sound like a description of the repeal amendment’s conditions and the leaks from the Pentagon working group’s report.

Then, a group including Equality Nevada and Stonewall Democrats of Nevada released information that they had been told by Sen. John Ensign (R-Nev.)’s regional representative Margot Allen that “Senator John Ensign does not support the Don’t Ask, Don’t Tell policy and will vote to repeal it.” [UPDATE: Sargent reports that Ensign’s office followed up with a clarification similar to Murkowski’s that states support for repeal if certain conditions that are likely to occur are met.]

In addition, officials with the offices of Sens. Susan Collins (R-Maine) — who voted for repeal in the Senate Armed Services Committee in May — and Richard Lugar (R-Ind.) told Sargent that they, under the right procedural circumstances, would support a lame-duck NDAA/DADT repeal vote.

That done, the 56 Democratic senators who are on the record supporting repeal moving the NDAA forward for a vote even if DADT repeal is included* (more on that in a second) — having lost Democratic Sens. Blanche Lincoln and Mark Pryor of Arkansas in the September vote — would have four Republican votes if the four above stay on board, giving them the 60 votes necessary to overcome a filibuster. (But, only 60 — and one of those Democrats (again, more in a second) is going to be replaced soon by a Republican who’s already voted against repeal once this year.)

These four Republican senators — with their public statements this week — are, thus, sending a strong message to Sen. John McCain (R-Ariz.) — and to Minority Leader Mitch McConnell (R-Ky.) — that the unquestionable party loyalty seen at the height of election season might not apply in the lame-duck session.

But, they also might signal how Lieberman could be getting to “more than 60 votes” for repeal.

Sens. Scott Brown (R-Mass.), Olympia Snowe (R-Maine) and George Voinovich (R-Ohio) are Republicans whose votes were targeted in September. In addition, Sen. Joe Manchin (D-W.V.) is a new senator whose DADT repeal vote is uncertain — and he has replaced a senator, Sen. Carte Goodwin (D-W.V.), who voted for moving forward with NDAA debate in September. (Sen. Roland Burris (D-Ill.) is to be replaced by Rep. Mark Kirk (R-Ill.) when he is sworn in on Nov. 29, according to NBC Chicago. That would create a similar situation to that in West Virginia and pull the current count back down to 59.)

What do these senators all have in common?

Why is this relevant?

With the partisan election pressures gone, the senators in question are in a good position to vote for repeal. If they want to vote for repeal — obviously, a big “if” — they have what amounts to a very strong backstop among their general election electorate (although, obviously, not an absolute “free pass” because of the possibility of Republican primary challenges).

If these senators want to vote for repeal, they can point to public opinion polling, the leaked (and eventually announced) results of the troop survey and their fellow home-state senator to say, simply, that this issue has reached the elusive tipping point and that they are voting for the NDAA with DADT repeal to support the troops and to be on the right side of history. Or they needn’t even say it — but it remains the reality, and a strong reason why these senators could vote for repeal without likely encountering much opposition at home.

With that “tipping point,” Lieberman could get to his vote count comfortably — and “more than 60” senators would vote to repeal the military’s “Don’t Ask, Don’t Tell” policy in this lame-duck session of the 111th Congress.

* = This change is necessary to reflect, specifically, the fact that Sen. Jim Webb (D-Va.) voted against the inclusion of DADT repeal in the Senate Armed Services Committee but voted for the NDAA once DADT repeal was added into the bill in both the committee and in the September floor vote. It is possible that other Democratic senators not on SASC hold a similar position.