Rep. Barney Frank Cruises to Victory, Cicilline to Join Him in Congress 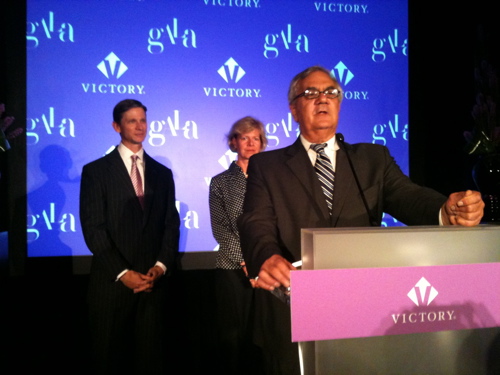 Out Rep. Barney Frank (D) — despite opposition from GOProud — is cruising to victory in Massachusetts, nearly doubling his challenger, Sean Bielat. Frank will be joined by another out New Englander — Providence, Rhode Island, Mayor David Cicilline (D) — in the 112th Congress.

With 62 percent of precincts reporting, according to the AP, Frank stood at 61 percent to Bielat’s 36 percent.

From the Boston Globe‘s report:

Through 15 elections as a candidate for Congress, Frank has survived charges of carpetbagging, two rounds of redistricting, and a personal scandal that nearly doomed his career. This time, he battled economic instability, voter unrest, and the rise of the Tea Party.

The Victory Fund’s president and CEO, Chuck Wolfe, celebrated Frank’s victory, announcing in a statement, “Barney Frank is nothing if not a fighter, and we’re very happy he will return to the House and continue to fight for the people of Massachusetts and for all LGBT Americans.  Nobody has worked harder or longer in the U.S. Congress for fairness and equality for the LGBT community.”

The Victory Fund’s Wolfe said in a statement, “Mayor Cicilline will be a strong advocate for all Rhode Islanders, but he will also be an authentic voice for the millions of gay, lesbian, bisexual and transgender Americans who long for the day when we will be treated equally under law.”

Out Reps. Tammy Baldwin (D-Wisc.) and Jared Polis (D-Colo.) did not face races that even reached to the challenge that some had claimed Frank faced.

Polls, meanwhile, have not yet closed in out Democrat Steve Pougnet’s challenge to Rep. Mary Bono Mack (R) in California.

[Photo by Chris Geidner at the Victory Fund Leadership Awards Gala in 2010.]