News Analysis: While some service chiefs oppose repeal of the military law, all told the Senate they can implement repeal

Although the second day of Senate hearings into the Pentagon working group’s report on implementation of a repeal of ”Don’t Ask, Don’t Tell” brought some of the strongest opposition to repeal expressed by military or lawmakers to the fore, the Friday, Dec. 3 testimony also made very clear the difference between 1993 and today. 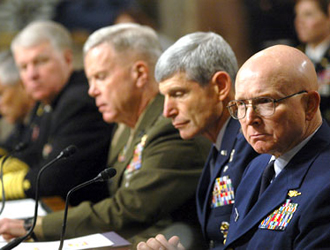 In 1993, hearings about open gay and lesbian military service featured prominent voices of opposition from Democratic senators like Sam Nunn (D-Ga.) and Robert Byrd (D-W.V.) and strong testimony against repeal from the chairman of the Joint Chiefs of Staff at the time, Gen. Colin Powell.

At the hearings this week, the job of opposing repeal fell to a far more marginalized group: Sen. John McCain (R-Ariz.) and Southern Republican senators like Mississippi’s Roger Wicker and Alabama’s Jeffrey Sessions. Even the opposition that came from the military – predominately from the heads of the Army and Marine Corps – was more nuanced and supportive than any of the military testimony received in 1993.

Despite McCain’s admonition – soon countered by Sen. Joseph Lieberman (I-Conn.) – that he has the votes to stop repeal, the testimony provided powerful ammunition for repeal for three positive reasons: First, all of the service chiefs and the vice chairman of the Joint Chiefs of Staff said that, at the end of the day, the military could implement repeal. Summing up their testimony, Lieberman said, ”I don’t want to put words in your mouth, but … all six of you support repeal, but three of you have concerns about timing.”

Then, in some of the most newsworthy testimony of the day, the chiefs also pushed back against the proposal floated to expand the certification process contained in the repeal language approved by the House – which requires the sign-off of the president, secretary of defense and chairman of the Joint Chiefs of Staff to finalize repeal – to include certification by the service chiefs.

Finally, the chiefs also refuted the criticism of McCain and others that the Pentagon survey of troops was insufficient. When Sen. James Inhofe (R-Okla.) asked Army chief of staff George Casey if the survey should have asked servicemembers if they thought that DADT should be repealed, he responded, ”I don’t think so. I don’t think the survey should have been a referendum.” Marine Corps commandant James Amos concurred with Casey.

All was not, however, positive for the case for repeal, on Friday, Dec. 3.

Amos told the senators that repeal has a ”strong potential for disruption at the small unit level.” He went on to say that he ”[does] not know how distracting” repeal would be, but that he believed there would be an impact.

Later in his opening statement, he said, ”Could we implement repeal at this time? The answer is yes…. We are Marines,” with the addition that his recommendation was against repeal ”at this time.”

Calling it ”a major cultural and policy change in the middle of a war,” Casey, meanwhile, told the senators that repeal will ”be more difficult for the Army than the report suggests.” Although he said the report ”undercuts the basic premise of the law,” he recommended holding off on implementing repeal for now.

Casey added that he does not ”envision that it would keep us from accomplishing our worldwide missions.”

Those, however, were the strongest voices of opposition to be heard from the 10 civilian and uniformed military leaders to come before the Senate Armed Services Committee on Dec. 2 and 3 in the wake of the Nov. 30 release of the Pentagon working group’s report.

Air Force chief of staff Gen. Norton Schwartz gave an even more nuanced view that, while judged as being aligned with Amos and Casey, actually provided a path for repeal implementation that the legislation being considered could, theoretically, allow.

Saying that the Air Force ”can accommodate repeal with moderate risk,” Schwartz said he ”cannot agree” with the working group report’s conclusion that the short-term risk is low. He suggested ”deferring full implementation and certification until 2012” – a comment he repeated several times during the senators’ questioning of the panel – while adding that legislative action is ”far” preferred to the possibility of court action.

The other three individuals who testified – the vice chairman of the Joint Chiefs of Staff and the heads of the Navy and Coast Guard – directly supported repeal at this time.

Gen. James Cartwright, a Marine and the vice chairman, echoed chairman Adm. Mike Mullen’s comments from the day before, saying that ”servicemembers look beyond … sexual orientation” and concluding that ”we embrace and are strengthened by the many differences among us.”

The chief whose comments were most supportive came from Adm. Gary Roughead, the chief of naval operations, who noted that 76 percent of sailors believe repeal’s impact would be neutral or positive. He assessed the ”risk [of repeal] to be low” and added that he believed ”recruiting and retention will not be adversely affected in the short term.”

In addition, the commandant of the Coast Guard, who reports to Homeland Security Secretary Janet Napolitano but in event of war serves under the Navy Department, was very supportive of repeal. Adm. Robert Papp said repeal ”will remove a significant barrier to those Coast Guardsman who are capably serving,” although he added, ”prudence dictates that implementation must proceed with caution.”

While repeal is by no means assured, the Dec. 3 testimony showed how much better the atmosphere for repeal is now than it ever has been. Sen. Jim Webb (D-Va.), who voted against adding DADT repeal into the NDAA, asked the chiefs, almost rhetorically, ”If someone is serving well and they are 15 years into their service … and they want to live an open and honest life. … What do we do?”

When someone responded that, until the law is repealed, the military will have to enforce it, Webb sharply replied, ”I’m talking about the human dimension.”

Within hours of the hearing, moreover, two Republicans, Sen. Susan Collins (R-Maine), who supported adding repeal into the NDAA but voted against proceeding to debate on the bill in September, and Sen. Scott Brown (R-Mass.), who did not support repeal or debating the bill earlier, announced their support for repeal – with a caveat from Collins about first addressing the tax-cut issue.

The vote is not yet done, and the testimony of this week confirmed that repeal will not be done immediately even if the bill is passed and signed into law, but – given the service chiefs earlier comments on the issue – there is no question that Dec. 3 could have gone far worse for those working to pass the language aimed at ending DADT this year.

View a gallery of photographs from Thursday‘s and Friday‘s hearings by Ward Morrison.