Home / News + Politics / Poliglot / Gibbs: “Congress has to ask themselves how they want to end this”

Gibbs: “Congress has to ask themselves how they want to end this” 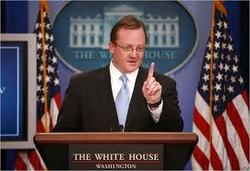 Gibbs responded, “I think it can and I think in as you mentioned, Jonathan, there are a number of individual senators that have come out in support of ending an unjust policy. As I said yesterday, the president has made calls to Democrats and Republicans on both ‘Don’t Ask, Don’t Tell’ and the DREAM Act ….”

Gibbs later was asked about what would happen if DADT repeal is not accomplished in this Congress.

Gibbs replied, “Our efforts our focused [on legislative repeal] through Congress.”

Referncing Defense Sec. Robert Gates and Adm. Mike Mullen, the chairman of the Joint Chiefs of Staff, Gibbs added, “There’s no better advocate than Secretary Gates and Admiral Mullen in believing how much this needs to get done this year.