Every vote matters. Today, it came down to three votes.

Each vote today rather perfectly fits with criticism being levied behind the scenes right now as people regroup and begin pushing for a stand-alone bill to repeal “Don’t Ask, Don’t Tell.” Although there is a desire to move on, there also is a need to look at what went wrong before advocates try this again. Moreover, none of this is to say that the advocates or others — including the media, for that matter — don’t deserve criticism. 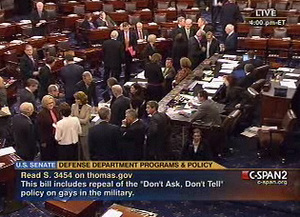 Each of the three votes that led to the 57-40 failing of the motion to proceed on the National Defense Authorization Act today, though, can serve as a tidy description of a failing of one of the main players today.

Majority Leader Harry Reid (D-Nev.) managed to find a way to hold the must-win vote to proceed to debate on the NDAA with a member of his caucus absent who later came to the floor to say that she would have voted yes on the vote had she been in attendance. Sen. Blanche Lincoln (D-Ark.) — who had voting against proceeding to debate on the bill in September — was, per Sen. Joseph Lieberman (I-Conn.), at the dentist at the time of the vote.

If Reid was looking to see any close vote pass — let alone a must-win, lame-duck, time-sensitive vote — one would hope that he would have made sure that all of his party’s yes votes were available to vote. The move, though, is just emblematic of the procedural criticism that has been thrown at him since the September vote — which also failed. Most observers of the process knew that a vote held prior to the consideration of the tax-cut bill this week was a doomed cause. Nonetheless, Reid moved to reconsider the bill today — although he has since pushed out his reasoning of why he took the vote when he did. He did so, according to Sen. Susan Collins (R-Maine), without even informing her — the primary Republican who supports repeal — that he was going to do so.

Collins — who was the sole Republican in committee to vote to include DADT repeal in the NDAA — meanwhile, failed to get the support of even one Republican to support the procedural vote today. Despite breaking with her party on the vote, she was not able to bring along Sen. Lisa Murkowski (R-Alaska), who announced on Wednesday that she supports repeal, stood on the floor conferring with Collins in the last moments of the vote and had not voted either way in the initial round of voting on the motion.

If and when Collins decided to vote for the motion to proceed — if she wanted it to be seen as more than show — she should have done so in a meaningful way that would have gotten additional Republican support. And yet, she was unable to get Murkowski’s support — despite whatever last-minute discussion happened on the floor. There were others, from the brand-new Sen. Mark Kirk (R-Ill.) to repeal supporter Sen. Scott Brown (R-Mass) to the retiring Sen. George Voinovich (R-Ohio), whose votes were considered possibilities but that she also was not able to secure.

Finally, President Barack Obama managed to lose the vote of one of the newest Democratic members of Congress, Sen. Joe Manchin (D-W.V.), on what is supposed to be one of the White House’s lame-duck priorities. The White House has said that Obama reached out to senators from both parties, so one has to presume that Manchin was one of those senators Obama contacted — although the White House did not respond to an inquiry asking about Obama’s efforts to secure Manchin’s vote.

What’s more, Manchin pretty well threw Obama under the bus as he left the Senate today, saying that “some believe that President Obama, as Commander-in-Chief, if he so chooses, has the authority to suspend discharges under DADT.” Obama has had to deal with troubling senators of his own party throughout his time as president, but — as with the loss of Lincoln and Sen. Mark Pryor (D-Ark.) in September — presidential leadership on an issue is always going to be questioned when Democrats stray from the party on must-win votes.

If the effort that Lieberman and Collins announced to put forth a stand-alone DADT repeal bill in this Congress still is to succeed, these failings from supporters of repeal — among Senate Democrats, Senate Republicans and the White House — could be the key to ending three votes — or more — up.