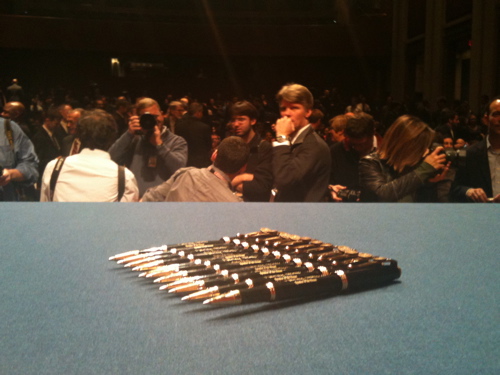 [Photo: The audience and members of the media — as well as a set of pens — await the arrival of Speaker Nancy Pelosi, who signed the Don’t Ask, Don’t Tell Repeal Act of 2010 on Tuesday, Dec. 21. President Barack Obama is to sign the bill into law on Wednesday, Dec. 22. (Photo by Chris Geidner.)]

In the Capitol Visitors Center Auditorium on Tuesday, Dec. 21, House Speaker Nancy Pelosi (D-Calif.) — in one of her last acts as speaker — brought a bit of Schoolhouse Rock to today’s, at times emotional, enrollment ceremony for the Don’t Ask, Don’t Tell Repeal Act of 2010.

With an auditorium full of about 500 people, Pelosi — joined on the stage by nearly a dozen fellow lawmakers and three current or former servicemembers impacted by DADT — held up an opened folder with two legal-sized pages on it and told the cheering crowd, “This is what a bill looks like — except it’s longer than this.”

Continuing, Pelosi said of the day’s signing of the enrolled bill, “Once it is signed, it will go down Pennsylvania Avenue to the White House, where tomorrow, President Barack Obama, who has led us in this fight, will sign the repeal of ‘Don’t Ask, Don’t Tell.'”

Although the presidential signing actually is slated to take place at the Interior Department, Pelosi was, more or less, on target with her lesson to the attendees — although she failed to mention the necessary additional signature of the president of the Senate, Vice President Joseph Biden.

Turning to the bill’s impact, though, Pelosi said that repeal “will change the law, improve the policy, make life better for many Americans and make our country stronger.”

Introducing the members of Congress in attendance with her, Pelosi began with the senators and then turned to the House, saying, “We are very, very proud of a person who served our country on the battlefield and served our country in the Congress, the author of the repeal of ‘Don’t Ask, Don’t Tell’ in the House, [Rep.] Patrick Murphy [(D-Pa.)].”

The mention was the first of three standing ovations for the lawmaker, who led the charge for repeal in the House since then-Rep. Ellen Tauscher (D-Calif.) left the House for a role in the State Department. After successfully shepherding the bill through the House, however, Murphy lost his re-election this fall and will, thus, not be returning to Congress in the new year.

Both Boxer and Frank mentioned their role as the sponsor of amendments in 1993 — discussed at Metro Weekly earlier this week — attempting to strip DADT from the National Defense Authorization Act. Boxer said of her effort, “I got 33 votes against ‘Don’t Ask, Don’t Tell’ 17 years ago.” Turning to Saturday’s cloture vote on the bill, she said, “This time, only 33 people said let’s keep it in, and the rest said get rid of it!”

Hoyer — who, along with Frank, were the longest-serving members of the House at the event — started by quoting from the Declaration of Independence, “We hold these truths to be self-evident.”

The House majority leader stopped, and then explained to an audience filled with people who have faced the burden of DADT’s discriminatory effects, “But what we have found throughout the history of this great nation, who held such high principles, that they were not self-executing. Self-evident, but not self-executing.

“Tomorrow, the president will sign a bill again taking a step, America will take that step, to realize what we perceived to be self-evident, but which we found was not self-executing,” Hoyer continued. “Tomorrow will be a giant step forward in realizing America’s promise of equality for all.”

When Murphy took his turn at the podium, to another standing ovation, he talked about the history of the fight against DADT and told the story of one servicemember, stationed in Kabul, who served under DADT and in silence. Then, of the end of DADT, Murphy said — to his third standing ovation — “It’s been a long journey, but it came to its rightful and just conclusion.”

Over jubilant applause, Frank continued, “For those who are worried about the radical homosexual agenda, let me put them on notice: Two down, two to go.”

To make that so, Pelosi later took a seat at the table set up for the enrollment signing, looked at all the pens laid out before her and — as she began signing — said to the audience, “The president does this faster and left handed.”

Then, as the time it took her to sign increased, Pelosi moved on to thanking others.

“Vice President Biden, he was so helpful with this.

“And, as Secretary Gates was mentioned.

“Chairman of the Joint Chiefs Mullen, he was so wonderful.”

Then, looking out at the audience: “All of you.”

Finishing at last, Pelosi looked up, presented the signed bill, and said, “Isn’t this a joyful day?”

After a moment, she handed the bill to Frank, who took it and immediately walked in front of the table set out for the signing. 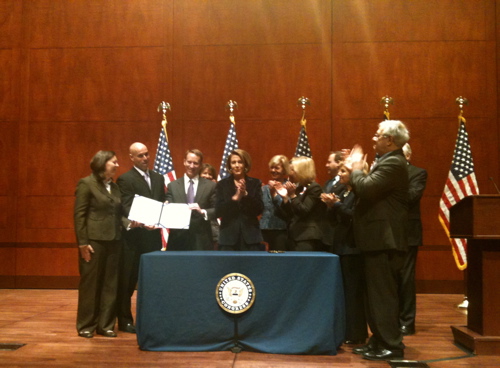