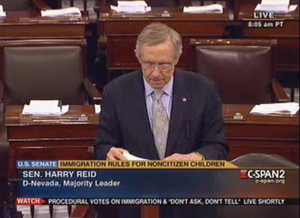 On a 63-33 vote, and with six Republicans voting “yes,” the U.S. Senate — at a little before noon today — voted for cloture on the stand-alone bill aimed at repealing the “Don’t Ask, Don’t Tell” law, overcoming the largest hurdle remaining for repeal of the 1993 law banning openly gay, lesbian and bisexual military service.

The House approved the bill overwhelmingly this past week, and President Barack Obama has expressed his strong support for the bill and said in a statement issued after the cloture vote, “It is time to close this chapter in our history. It is time to recognize that sacrifice, valor and integrity are no more defined by sexual orientation than they are by race or gender, religion or creed. It is time to allow gay and lesbian Americans to serve their country openly. I urge the Senate to send this bill to my desk so that I can sign it into law.”

The cloture vote, which required the approval of at least 60 senators, means that only 30 hours of debate remain before DADT repeal comes up for a final vote. Usually, because the vote for final passage only requires a simple majority vote of the senators, the 30-hour requirement is waived. It was not clear, however, whether Minority Leader Mitch McConnell (R-Ky.) would allow the requirement to be waived regarding the DADT repeal bill.

[UPDATE @ 1:30 PM: The Republicans did agree to unanimous consent, so the majority vote on final passage is expected to happen about 3 p.m.]

In a statement issued immediately after the vote, Human Rights Campaign president Joe Solmonese said, “Today, America lived up to its highest ideals of freedom and equality. Congress recognized that all men and women have the right to openly serve their country. Plenty of people had already planned the funeral for this legislation. Today, we pulled out a victory from what was almost certain defeat just a few days ago.”

In a statement, Servicemembers United executive director Alex Nicholson said, “This vote represents an historic step forward for this country, and it will very likely be a life-changing moment for gay and lesbian troops.

“While we still have a long road ahead, including a final passage vote, the certification process, and a yet-to-be-determined implementation period, those who defend our freedom while living in fear for their careers will finally breathe a sigh of relief tonight, and those who have fallen victim to this policy in years past will finally begin to see true closure and redemption on the horizon.”

Aubrey Sarvis, the executive director of Servicemembers Legal Defense Network, said in a statement, “Gay, lesbian and bisexual service members posted around the world are standing a little taller today, but they’re still very much at risk because repeal is not final.”

Sarvis went further, though, pointing to the fact that the policy remains in effect.

“I respectfully ask Defense Secretary Robert Gates to use his authority to suspend all ‘Don’t Ask, Don’t Tell’ investigations during this interim period. Until the President signs the bill, until there is certification, and until the 60-day Congressional period is over, no one should be investigated or discharged under this discriminatory law,” he said. “Even with this historic vote, service members must continue to serve in silence until repeal is final.”

Sen. Joe Manchin (D-W.V.) was the only Democrat not to vote “yes,” instead not casting a vote at all and issuing a statement saying that he cannot support DADT repeal at this time. Three Republicans did not vote: Sens. Jim Bunning (R-Ky.), Judd Gregg (R-N.H.) and Orrin Hatch (R-Utah).

The vote came less than 10 days after the Senate failed to achieve cloture on a motion to proceed to debate on the National Defense Authorization Act, which contained the DADT repeal provision.

It also came just moments after the Senate failed to achieve cloture on the DREAM Act, an immigration bill that had been a key goal of liberals for passage in the lame-duck session, on a 55-41 vote.

The White House issued a statement from Obama, in which he said:

Today, the Senate has taken an historic step toward ending a policy that undermines our national security while violating the very ideals that our brave men and women in uniform risk their lives to defend.  By ending “Don’t Ask, Don’t Tell,” no longer will our nation be denied the service of thousands of patriotic Americans forced to leave the military, despite years of exemplary performance, because they happen to be gay. And no longer will many thousands more be asked to live a lie in order to serve the country they love.

As Commander-in-Chief, I am also absolutely convinced that making this change will only underscore the professionalism of our troops as the best led and best trained fighting force the world has ever known.  And I join the Secretary of Defense and the Chairman of the Joint Chiefs of Staff, as well as the overwhelming majority of service members asked by the Pentagon, in knowing that we can responsibly transition to a new policy while ensuring our military strength and readiness.

I want to thank Majority Leader Reid, Senators Lieberman and Collins and the countless others who have worked so hard to get this done.  It is time to close this chapter in our history.  It is time to recognize that sacrifice, valor and integrity are no more defined by sexual orientation than they are by race or gender, religion or creed.  It is time to allow gay and lesbian Americans to serve their country openly.  I urge the Senate to send this bill to my desk so that I can sign it into law.