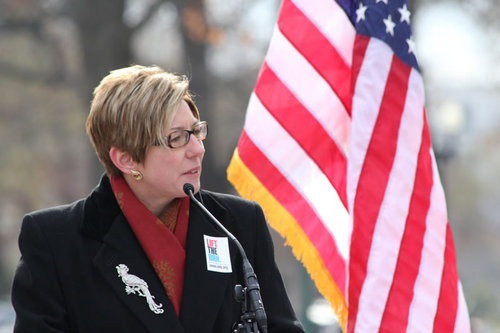 One day after the Senate failed to proceed to debate on the bill containing a repeal of “Don’t Ask, Don’t Tell,” a dedicated crowd joined members of Servicemembers Legal Defense Network on the crisp December day to urge the Senate to stay in session until the 1993 military law is repealed.

[For Metro Weekly‘s video from today’s rally and an interview with SLDN executive director Aubrey Sarvis, see below the jump.]

Michelle Benecke, a co-founder of SLDN, told the crowd, “‘Don’t Ask, Don’t Tell’ is a big lie. Members of Congress should stay in session to repeal it.”

“If we miss this window,” she said, “it will be years before legislation could make its way make to the floor.” 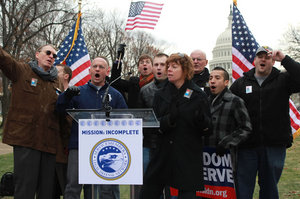 The vehicle to do so — S. 4022 — was introduced by Sen. Joseph Lieberman (I-Conn.) and initially co-sponsored Sens. Susan Collins (R-Maine), Kirsten Gillibrand (D-N.Y.) and Mark Udall (D-Colo.). The office of one of the co-sponsors confirmed that the bill contains the same language as the amendment included in the National Defense Authorization Act. Additional co-sponsors have since joined the effort, and Lieberman said on Thursday that Majority Leader Harry Reid (D-Nev.) promised to bring the bill to a vote in this year’s lame-duck session.

The process for doing so, however, is rife with complications. As the Human Rights Campaign spokesperson Fred Sainz told Metro Weekly this morning, though, “There’s no doubt that this process is complex but this can get done. It should get done. It will simply require the dedication and creativity of all parties.”

The bill would need to be passed in both chambers of Congress, which could happen rather quickly under House rules but would require some precious lame-duck floor time in the Senate. As Udall said on Thursday, though, “I’m willing to stay through the holidays to debate it as a stand-alone measure.” 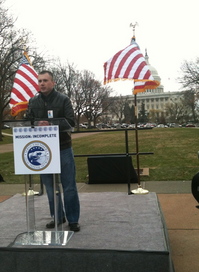 At today’s SLDN rally, which appeared to be co-sponsored by nearly as many organizations as there were attendees, all eyes (and cameras) were on veterans — from former Air Force Major Mike Almy, who testified before the Senate Armed Services Committee earlier this year about his DADT discharge, to former Army Sgt. Pepe Johnson.

Almy focused on Sen. George Voinovich (R-Ohio), who voted against the motion to proceed to debate on the National Defense Authorization Act on Thursday. From Dayton, Ohio, Almy said that Voinovich — who did not run for re-election and is in his last days as a senator — must stay until repeal is completed in order to ensure that his legacy is one of fairness.

Johnson, meanwhile, slammed his home-state senator as well. A proud West Virginian, Johnson told Sen. Joe Manchin (D-W.V.) — the sole Democrat to vote against the motion to proceed on Thursday — how he felt about Thursday’s vote.

“I was embarrassed because Joe Manchin decided to be a lone ranger — and vote against the repeal of ‘Don’t Ask, Don’t Tell.’ He said he’d only been in office for three weeks so he didn’t have a chance to hear from the people of WV” he said. “You have heard from the people of West Virginia. Sen. Robert C. Byrd, Sen. Goodwin, Sen. Rockefeller — they all voted in favor of repeal. You’ve heard from the troops. There’s a study.”

“We’re just as capable, and we care as much about this country as everyone else,” Johnson said. “We’re not here with some kind of agenda — except for maybe that ‘freedom’ agenda.

[UPDATE @ 5 PM: Near the end of the day, several organizations supporting DADT repeal issued a statement supportive of and hopeful about the Lieberman effort:

“Despite the unfortunate result of the Senate’s cloture vote on the defense authorization bill, there  are other viable legislative options to repeal ‘Don’t Ask, Don’t Tell’ before Congress adjourns, and a solid 60-vote Senate majority still in favor of repeal. With commitments on record from the Senate Majority Leader and the Speaker of the House to move this new bill, as well as Secretary Gates’ urgent and renewed request that repeal happen in this Congress, we are confident repeal can still happen this year.”]

[Photo, above right: The speakers at today’s SLDN rally. Photo, below: The crowd gathers at today’s rally to end DADT. (Photos by Dylan Comstock.)] 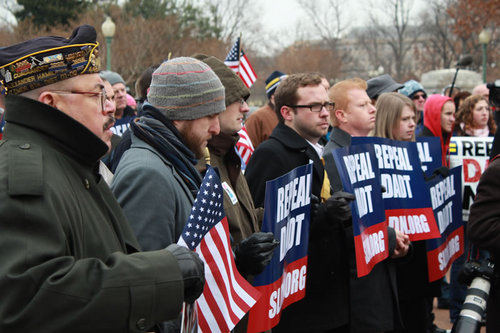