The Maryland State Senate took a historic step toward marriage equality on Thursday, Feb. 24, voting in favor of a bill that would grant same-sex couples in the state legal marriage recognition, while also protecting the rights of religious institutions to handle issues of marriage however they see fit. 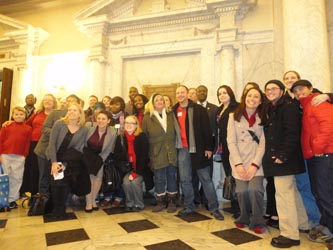 The third and final reading of the bill picked up from recess a few minutes after 5:40 p.m. on Feb. 24, and Senate Majority Leader Robert J. Garagiola (D-Montgomery), the bill’s lead sponsor, called for a vote to limit debate to 30 minutes from each side. Shortly before 6:30 p.m., the Senate voted in favor of the bill, 25-21, followed by applause on the Senate floor.

Madaleno exited the Senate chambers hugging constituents and colleagues in excitement and celebration.

And while the marriage bill has passed a major hurdle, marriage equality in Maryland is not guaranteed. A House version of the bill is expected to be introduced in committee this week, and according to the Baltimore Sun, Del. Don H. Dwyer Jr. (R- Anne Arundel County), who is notorious for supporting anti-LGBT measures in the past, has pledged to ”take the gloves off.”

Currently there are 58 Delegates sponsoring the bill, and 71 votes are needed to pass in the House.

Maryland Gov. Martin O’Malley has said that if passed in the House of Delegates and Senate, he would sign the marriage equality legislation into law.

Naturally, the opposition won’t stop there. 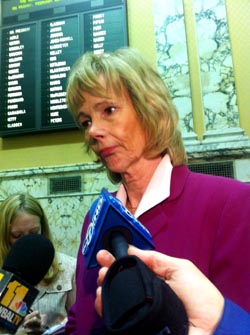 Sen. Nancy Jacobs (R- Cecil and Harford) said she and others opposing the bill would begin a petition process to repeal the law, ”the second we are allowed to start.”

When asked about who will fund the effort, Jacobs said ”a lot of churches” and several national groups.

Reacting to the passage of the bill, Jacobs said she was ”disappointed.”

”It’s difficult,” she added, ”But now we have another task ahead of us, and that’s to get the people involved and the petition going to bring it to referendum. I feel certain it’s going to happen.”

Talking to Metro Weekly immediately after the vote, Raskin described the night as ”an exhilarating moment.”

”So much political organizing, and strategizing and labor went into it, and today my thoughts have totally been with all of the gay people who over the last several decades have come out of the closet and have made themselves known to their friends, their neighbors, their co-workers, that has been the essential pre-condition for our success here,” Raskin said.

”Because if people don’t know gays and lesbians it’s not real for them. But suddenly, gay people are in every place and it’s not such a big deal anymore. So I’m very proud of the gay and lesbian movement for bringing us to this point.” 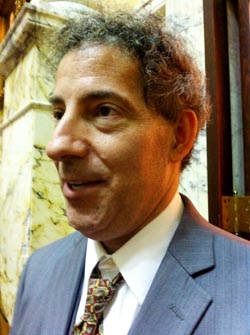 Raskin will continue to work delegates in the House to ”push it through there.” He added that if it does go to referendum, ”then we’ll run it like a campaign. We will be the first state in America where same sex marriage wins on the ballot,” he says.

Madaleno is hoping it doesn’t go that far.

”I hope the good people of Maryland will see that this is not a good issue to put on the ballot,” he said. ”Because you don’t want to put the rights of the people to a vote, that’s not been an American tradition, or a Maryland tradition, so hopefully people will come together and say, ‘Let’s let this pass, and move on to love.”’

Supporters of the marriage bill, and the co-sponsors of the bill, celebrated the bill’s historic passage through the Maryland State Senate, that began with an introduction on Feb. 17 in the Judicial Proceedings Committee, outside the Senate chamber after the floor vote.

”I go home at the end of every day in this fight to my wife, and to our little girl. For me this is so much more than a law, it’s about protecting our child and it’s about all the other families and I’m so thrilled,” she said.

Sen. Jennie Forehand (D-Montgomery), who voted in favor of the bill, told Metro Weekly passage of it is ”important for everybody.”

”Opponents had told me all sorts of things and I said, ‘Well, it’s not going to hurt my marriage, I’ve been married 50 years… why not let people have love? It’s not our business what other people do,'” she said.

And while Forehand said many of her constituents opposed the measure, she was most impacted by a visit from a nun who appeared at her office to thank her for her vote in committee.

Before its final reading on Feb. 24, Senate Bill 116 was called the ”The Religious Freedom and Civil Marriage Protection Act.” That changed during the bill’s second reading, when a series of amendments were approved, rejected or withdrawn from the Senators. At that point, Sen. C Anthony Muse (D-Prince George’s County) presented an amendment to take out ”Religious Freedom and” from the title of the bill.

“There is nothing that would apply to all to say that this bill is about religious freedom,” Muse said, “it is not.”

“Our entire discussion has been about same-sex marriage in Maryland, and that’s really what it is.”

Other amendments that were adopted to Senate Bill 116 included one introduced by Sen. Jamie Raskin (D-Montgomery County), co-author of the marriage bill, clarifying gender language in the bill by stating that one cannot marry certain individuals including siblings.