U.S. Diplomat on Uganda’s Bahati: “His homophobia … is blinding and incurable.” 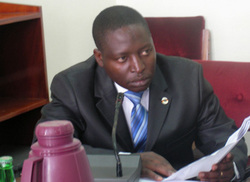 The cables show an acute awareness of the sensitivity of the issue and the danger of the anti-gay legislation. They also provided references detailing the State Department’s knowledge of recently killed Ugandan LGBT activist David Kato’s concern for his safety and freedom when addressing his opposition to the bill.

Under the heading “Homophobic Demagogues,” the diplomat in one cable dated Dec. 24, 2009, writes:

Recent condemnations by [U.S. Pastor Rick] Warren and other U.S. based individuals have further isolated [the sponsor of the Anti-Homosexuality Bill, MP David] Bahati. His homophobia, however, is blinding and incurable. Bahati, Buturo, and particularly Ssempa’s ability to channel popular anger over Uganda’s socio-political failings into violent hatred of a previously unpopular but tolerated minority is chilling. … Helping those attempting to counter Bahati, [Uganda Ethics and Integrity Minister James] Buturo, and [Pastor Martin] Ssempa to better craft their arguments – perhaps through a digital video conference or some other venue – is worth pursuing.

Earlier in the same cable, Kato’s efforts opposing the bill are discussed:

On December 18, the Uganda Human Rights Commission (UHRC) organized – with support from the UN Office of the High Commissioner on Human Rights – what turned out to be a one-sided debate on the anti-homosexuality bill.

Bahati’s remarks mirrored his private statements to PolOffs. Bahati also attacked the White House statement opposing the bill, saying that he admires President Obama, that President Obama ran on a platform of change, and that Uganda’s message to him is that “homosexuality is not a change but rather an evil that we must fight.” At this point the room erupted in loud applause ….

Kato delivered a well-written speech defending the rights of gay and lesbians in Uganda. However, his words were nearly indecipherable due to his evident nervousness. … XXXXXXXXXXXX representatives left shortly after Kato’s speech, fearing that Bahati had instructed the Inspector General of Police to arrest Kato.

In another cable, dated Feb. 16, 2010, the diplomat provides a comment on “Fighting State Sponsored Homophobia,” writing:

Even if draft bill is shelved in the weeks ahead, rampant homophobia in Uganda won’t go away. Local efforts to deconstruct Uganda’s anti-homosexuality movement go well beyond public condemnation of the anti-homosexuality bill by directly challenging Uganda’s pervasive homophobia. These efforts are worthy of additional and sustained support.