The Capital Queer Prom returns to the water next Saturday

”I will never wear a dress,” says Eboné Bell. The 29-year-old, who describes herself as ”more masculine or butch” than your typical woman, gave up wearing dresses soon after her high school prom.

”It wasn’t me,” she continues. ”It wasn’t until a few years after high school that I really knew who Eboné was.” 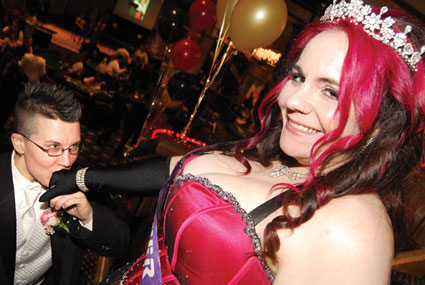 Five years ago, Bell sensed she wasn’t alone in her late-blooming identity, or at least in wanting to ”redo” her prom with a genuine prom sweetheart of the same sex. So she created the Capital Queer Prom, where men can wear dresses and women can be prom king candidates, flipping the script.

”That’s the cool thing about a gay prom,” she says. ”You can come in whatever you feel comfortable in.” That is, as long as it’s ”formal attire” — at least a nice dress or suit, if not a ball gown or tuxedo.

Put on by Bell’s company, BOI Marketing and Promotions, the Capital Queer Prom draws upwards of 300 people every year, and raises up to $4,000 for a designated beneficiary. This year’s fifth annual event benefits the Youth Pride Alliance.

After last year’s prom at Almas Temple, this year’s event finds itself once again on the water, on a boat cruising the Potomac. It’s also become a weekend affair, with a bar ”meet and greet” the night before at Adams Morgan’s The Reef, two after-parties immediately following the event — one at Cobalt, the other at Phase One — and brunch the day after at Nellie’s.

Bell has plans to expand the queer prom concept to other cities. The few ”second-chance proms” that have sprouted since she started the Capital Queer Prom are largely intended for recent high school graduates or the college-age set, not, as with hers, strictly for adults, ”that 60-year-old couple that wants to come out and have a good time.”

The Capital Queer Prom is Saturday, March 19, on the Spirit of Mount Vernon, from 9 p.m. to midnight. Boarding begins at 8:30 p.m. Tickets for the prom are $75, or $95 for prom and brunch. Visit capitalqueerprom.com.