More than three months ago, on Dec. 22, 2010, President Barack Obama signed the Don’t Ask, Don’t Tell Repeal Act into law, declaring to the crowd assembled, “We are a nation that welcomes the service of every patriot.”

A little more than a month later, on Jan. 28, Undersecretary of Defense for Personnel and Readiness Clifford Stanley made clear repeatedly at a news conference that DADT remains in effect until the law’s required certification, saying at one point, “It is still possible for a person to be discharged [under DADT]. I have heard nothing about a moratorium.” 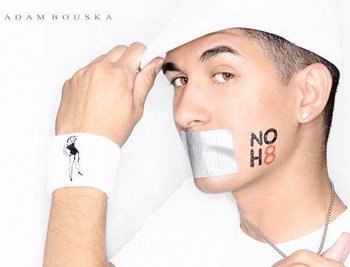 Today, that point was proven out as a three-person administrative separation board heard from the government, witnesses and the military-appointed lawyer for Petty Officer 2nd Class Derek Morado, in one of the first disclosed separation hearings since the DADT Repeal Act was signed into law.

J.D. Smith, the co-director of OutServe — a group that started in 2010 for gay, lesbian and bisexual servicemembers — said he had not heard of any other separation hearings since the repeal act was signed into law. As for commanders moving forward DADT-related discharge processes, though, he said, “That’s absolutely still going on.”

Morado approached Get Equal, according to the director of the organization that burst onto the scene in the spring of 2010 with its aggressive approach to LGBT equality advocacy — that often ended in arrests — for help. The group then sent an email alert to its members about Morado’s case on March 30.

As the fresnobee.com detailed on March 30, Morado’s case began when “he posted a photo of himself on his MySpace page [in 2009] kissing another man. … A senior enlisted man in his ordnance and weapons unit turned him in, he said, and an admiral signed off on discharge proceedings.”

As to Morado’s efforts in advance of the hearing to reach out to Get Equal, director Robin McGehee said, “He was unsure what the process was going to be like and, just like us, very perplexed that he was hearing all these celebratory reports about repeal and why his hearing was continuing.

“For him, he was baffled …. He thought for sure his hearing was going to be put on hold,” she added. “He was fearful that they were trying to make this happen before implementation.”

Following today’s hearing, the panel recommended Morado’s retention in a 3-0 decision, according to an email sent by Get Equal this evening, which a lawyer familiar with the DADT discharge process said ends the case and allows Morado to continue serving.

Had the panel recommended Morado’s separation, however, the separation would have to be reviewed by an admiral or higher, according to the lawyer. Additionally, a “Letter of Deficiency” could have been filed by Morado’s lawyer, detailing any problems with the panel’s decision. That Navy official’s recommendation would then — under the October 21, 2010, changes put in place by the Pentagon — have needed to be approved by Navy Secretary Ray Mabus, in consultation with the defense department general counsel and the undersecretary of defense for personnel and readiness, before Morado could have been discharged.

Before learning the outcome of the hearing, however, McGehee discussed the “emotional and physical stress” that she said Morado was facing and added pointedly, “It really begins to make you question why we’re wasting the money on a hearing like this and also why were allowing the military to bully him.”

Smith went further, saying, “The fact that everyone knows that the Pentagon hasn’t discharged anyone since Obama signed the repeal law, and yet we are seeing, on the unit level, discharge procedures still going forward — it’s creating an almost harder position for some people.”