The Senate Judiciary Committee, chaired by Sen. Patrick Leahy (D-Vt.), held confirmation hearings today on four of President Barack Obama’s nominees for the federal judiciary. The hearings were led by Sen. Charles Schumer (D-N.Y.), however, and garnered attendance only from Schumer and freshman Deleware Sen. Chris Coons (D) — despite the fact that one of the nominees is openly gay and another had worked on litigation seeking marriage equality in New York. 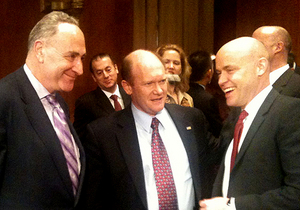 J. Paul Oetken, an out gay attorney who worked at Jenner & Block and Debevoise & Plimpton, also spent substantial time in government, working in both the Justice Department’s Office of Legal Counsel and the White House under President Clinton. A former law clerk to the late Supreme Court Justice Harry Blackmun, Oetken currently serves as the senior vice president and associate general counsel at Cablevision.

He was nominated, on Schumer’s recommendation, for a judgeship on the Southern District of New York — one of the key federal trial courts in the nation.

In Schumer’s introduction of Oetken, the senator noted that, in addition to records of excellence and moderation, “I also look for candidates who bring diverse views and backgrounds to the bench. Paul is the first openly gay man to go through an Article III confirmation process in this country, which makes this moment historic. But long after today, what the history books will note about Paul is certain to be his achievements as a fair and brilliant judge.”

Schumer did not mention that another of Obama’s judicial nominees, Edward C. DuMont, also is an out gay attorney. His nomination, however, did not progress in the 111th Congress, despite having been nominated initially in April 2010. Obama renominated DuMont at the start of the 112th Congress, three weeks before Oetken’s nomination on Jan. 26, yet his nomination has still not yet received a hearing.

Coons echoed Schumer’s remarks, adding the insight that he was a classmate of Oetken’s at Yale Law School. He called Oetken “a shockingly bright person” with a “broad range of capabilities.”

Among the other nominees being considered was Paul Engelmayer, another nominee for the Southern District of New York, who Schumer noted had “been involved in highly contentious cases, such as the New York state same-sex marriage case.”

Engelmayer, an attorney at Wilmer Cutler Pickering Hale and Dorr since 2000, wrote on his Judiciary Committee questionnaire that he “represented 10 same-sex couples who had been denied marriage licenses in New York State and who … challeng[ed] that denial.” The case, Shields v. Madigan, lost at the trial court level and on appeal. The highest court in New York, the New York Court of Appeals, heard a similar case in 2006, Hernandez v. Robles, that resulted in a 4-3 ruling against those seeking same-sex marriage licenses.

The questions from Schumer and Coons, which related to the nominees’ views on the role of a judge and their experience for such a position, included a question from Schumer about Engelmayer’s experience with cases such as the same-sex marriage case. He asked, “Can you give the committee assurance that you understand the difference between being an advocate and being a judge?”

Engelmayer responded, “There is an enourmous difference between being an advocate and being a judge, and I understand it. An advocate’s responsibility is to zealously advance the interests of his or her client. … A judge stands in an entirely different situation. A judge is a passive recipient of cases brought by other people and his or her responsibility is to resolve those case as narrowly as possible in accord with the rule of law, checking all of his or her personal [views] at the courthouse door.”

In response to a question from Coons about hows his experience would help him a a judge, Oetken said, “I think the sort of common thread in terms of qualities that I have that I think would serve me well on the federal bench are, in particular, my ability to listen carefully to the parties and to different arguments and to not give short shrift to those arguments but to try to understand them in their best light, to analyze difficult legal issues carefully and rigorously, to write well and, at the end of the day, to rule on the basis of the law and precedent and the facts of a particular case before me.”

Among those who attended the hearing was Paul Smith, a partner at Jenner & Block, where Oetken previously worked. A prominent Supreme Court lawyer, Smith previously served chair of the board of directors of the progressive American Constitution Society. Of the hearing, Smith said, “It went very, very well. As you’d expect, the nominees are very well qualified — certainly Paul Oetken, who I’ve known for many years, will be a great judge.”

After the hearing, Schumer told Metro Weekly that the next step would be a mark-up and vote on the nominations in the committee. As for the timing, he said that Leahy would set it, but, “The sooner the better.”

Smith, who argued Lawrence v. Texas — the landmark U.S. Supreme Court case that ended sodomy laws in the country — also talked about changed attitudes regarding LGBT equality. Of the lack of any expressed opposition from committee members regarding Oetken’s sexual orientation or Engelmayer’s work in support of marriage equality, Smith told Metro Weekly, “The world is changing. We hope it continues to change. It does seem that the reaction here is quite different than it might have been 10 years ago to nominees with these backgrounds.”

Looking over toward Oetken, he added, “Very interesting to see — very pleasing to see.”