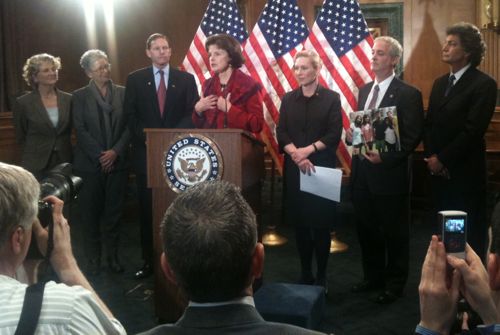 [Photo: Sen. Dianne Feinstein (D-Calif.) speaks at the Senate introduction of the Respect for Marriage Act on March 16, 2011. (Photo by Chris Geidner.)]

At an afternoon news conference in the Dirksen Senate Office Building, Sen. Dianne Feinstein (D-Calif.) kicked off what she said would be “a long road” to passage of the Respect for Marriage Act in the U.S. Senate — an effort also launched earlier today in the House that received support this afternoon from the White House.

Laying out her aim to repeal the Defense of Marriage Act by “us[ing] the regular order [of Senate procedure] as much as we can … so that the hearings are held and nobody can say we pushed anything through,” Feinstein also noted her opposition to DOMA since its original passage in 1996 because, she said, marriage has traditionally been regulated by the states.

White House spokesman Shin Inouye told Metro Weekly in an email this afternoon, “The President has long said that DOMA is discriminatory and should be repealed by Congress. We welcome the introduction of bills that would legislatively repeal DOMA, and look forward to working with lawmakers to achieve that goal.”

Of the repeal effort, though, which was being introduced with no Republican support in either chamber, Feinstein said, “Nobody should think this is easy. It’s not easy. … Whether it takes one year or two years or three years or four years, we are committed to it.”

Calling DOMA an “injustice that is wrongly enshrined in U.S. law,” Sen. Kirsten Gillibrand (D-N.Y.) referenced the successful passage of the Don’t Ask, Don’t Tell Repeal Act and said, “I know we will will prevail for marriage equality, too.”

Both Gillibrand and Feinstein introduced a couple from their respective states who are fighting to repeal DOMA — Jeanne Rizzo and Pali Cooper of California, who spoke of the way their marriage was dismissed by U.S. Customs Service agents on the way home from their honeymoon, and Jon and Robert Cooper of New York, who married in Connecticut and spoke about their parenting of five adopted children.

Sen. Chris Coons (D-Del.) — in his first months in the Senate — joined Feinstein, Gillibrand and Sen. Richard Blumenthal (D-Conn.) at the news conference introducing the bill, saying, “We are not proposing, through the repeal of DOMA, to build a new wall; we are proposing to tear one down. … Discrimination should not be the policy of our government.”

Blumenthal, the longtime state attorney general in Connecticut before moving to the Senate after his election this past November, discussed the need for legislative repeal, saying, “Ultimately, the courts will strike down DOMA as unconstitutional, but they will do so too slowly for our federal government to send a message that discrimination in the United States is intolerable ….”

As for the lack of Republican co-sponsors, Feinstein directed the audience to provide help, saying, “Well, that’s all we have now, so go go go!”

Talking with Metro Weekly after the news conference, Gillibrand added, “We will get Republican support. We will earn it over time.”

Of efforts to recruit Republican co-sponsors, she noted, “We didn’t have any early takers, but that doesn’t mean we won’t have support from the Republican Party.”