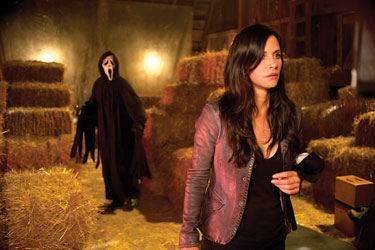 When the first Scream was released in 1996, it was a revelation that almost immediately took on legendary cult status. Not only was it scary, it also embraced all of its horror film clichés and used them like steroids to heighten the thrills and chills. With any success comes a sequel, and poor Sidney Prescott (Neve Campbell) had to battle the ominous Ghostface two more times, each chapter riding further off the rails and away from the self-awareness and fright-mongering that made the first so successful.

Fast forward to 2011. What was called self-awareness in the mid-90s is now oh-so-meta, a word that even the movie’s characters throw around with equal parts pretension and ignorance. Director Wes Craven and writer Kevin Williamson, the wonder team behind the first two films (a new writer was brought in for the third), reunite to bring Sidney back to her hometown, Woodsboro, for another orgiastic bloodbath.

As Drew Barrymore so ably demonstrated in the first film, the open sequence sets the tenor for the entire film. Like the original, the opening of Scream 4 — or Scre4m — is nearly pitch-perfect. To say any more would be impossible without ruining it, but after 10 years, it’s a moment of bloody, gory celebration. After it’s all over and the movie’s central plot begins, it’s impossible to ignore the fact that the audience screams are ones of laughter, not terror. Williamson’s script is filled with digs at films like Saw and The Ring, which are fun, but far from fearful.

Sidney returns to Woodsboro to promote her new self-help book. Still living there are Deputy — now Sheriff — Dewey (David Arquette) and Gale Weathers (Courteney Cox), former tabloid reporter turned housewife. In an attempt to explain why Sidney doesn’t get the hell out of dodge once Ghostface returns, it’s suddenly revealed that she has family in town — an aunt (Mary McDonnell) and niece (Emma Roberts), who were MIA during the first three films. It’s a clumsy plot point, but a necessary one.

As the bodies pile up, everyone is once again a suspect, and familiar patterns emerge. Replacing the cinema-expert role played by Jamie Kennedy, two new movie buffs are introduced (Rory Culkin, Erik Knudsen) who explain the obvious points of the plot to those audience members too dense to get it on their own.

Since new chapters in horror films have a mandate of more bodies, the size of the supporting cast is mammoth. Williamson should be careful about critiquing Saw for a lack of character development and over-reliance on gore, since that’s what he and Craven wind up doing. The bevy of teenyboppers who get bopped off is mind-boggling, and it’s hard to tell them apart. The generic good looks and rapid killings are so frequent that they require the characters to do ridiculously stupid things. Rather than yell at the screen, ”Turn around, he’s behind you,” you want to mutter, ”You are too stupid to live” and leave it at that.

The divide between the old and new is never clearer than in the acting chops of the cast. Campbell, Cox, and Arquette all ably perform their roles. Campbell brings a little more fight to Sidney this time around, and it’s a necessary change. What’s most striking about Cox’s and Arquette’s performances is that the friction on-screen is an echo of their off-screen troubles. Perhaps their story wouldn’t be as raw without the knowledge that the film represented the end of their marriage, but it’s information that only enhances their time on screen.

The one exception to the new actors is Hayden Panettiere, who actually makes her part a standout among the potential victims. Aside from some brief appearances by bigger names like Anna Paquin and Kristen Bell, Panettiere is the only actor of note next to the older alums.

Scre4m makes use of technology to update the story, employing the advent of cell phones to off victims in new settings, like a parking garage. And it’s grounded in a world ruled by Facebook, reality television and online fame. Another addition to the horror genre is the gay character, an element so new that it’s considered impervious to conventional horror film norms that anyone can be a victim.

But Scre4m is a groundbreaking franchise that dares to be bold, so maybe being gay isn’t enough. Or has the bold reputation of Scre4m been left behind? That’s the question Craven needs to answer before embarking on any more sequels — how do you restore a brand that has been so spoofed and parodied that laughter trumps fear?