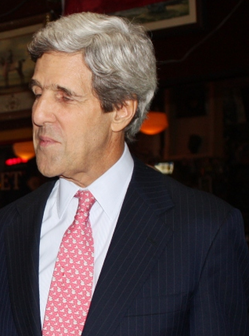 Following up on the March 31 letter that Rep. Rush Holt (D-N.J.) sent to Homeland Security Secretary Janet Napolitano seeking a stop on deportations of married, same-sex bi-national couples until a final judicial decision can be reached on the constitutionality of the Defense of Marriage Act, a significant group of senators joined the cause today.

Writing to both Attorney General Eric Holder and Napolitano, the 12 senators — led by Foreign Relations Committee Chairman John Kerry (D-Mass.) and including Judiciary Committee Chairman Patrick Leahy (D-Vt.) — ask the administration, among other steps, to put an abeyance policy in place that would halt the denial of green card applications for married same-sex foreign spouses who — in the absence of DOMA — would be eligible for a marriage-based green card based on sponsorship from the foreign spouse’s U.S. citizen spouse.

In all, the senators ask for the administration to take three steps, writing:

The lawmakers’ letters come on the heels of a week of developments that left such couples, their advocates and journalists reacting to or reporting on different situations on each day of the week.

[UPDATE @ 5:50 PM: Asked whether DOJ agreed with the senators’ suggestions, DOJ public affairs director Tracy Schmaler responded, “We’re reviewing the letter and will respond.” A DHS official said he was looking into the matter. [FURTHER UPDATE @ 6:30 PM: DHS spokesman Adam Fetcher writes, “The administration will respond to the members of Congress directly. Pursuant to the Attorney General’s guidance, the Defense of Marriage Act remains in effect and the Executive Branch, including DHS, will continue to enforce it unless and until Congress repeals it or there a final judicial determination that it is unconstitutional.”] The White House provided no comment on the letters other than to direct questions about them to the relevant agencies.

Steve Ralls, a spokesman for Immigration Equality, told Metro Weekly, “Today’s letter follows calls by several House Members — including Representatives Mike Honda, Zoe Lofgren, Jackie Speier and Jerrold Nadler — urging the Administration to return to a policy of abeyance for spousal petitions filed by LGBT couples. Immigration Equality is hopeful that the Administration will respond positively, and quickly, to lawmakers before more families are forced apart.

“We continue to believe that it is unconscionable to use a law DOJ believes is unconstitutional to separate couples. Today’s letter is a reminder to DHS and DOJ that they have the ability to keep families together, and have the authority to hold adjudication of green card applications until DOMA’s fate is settled by Congress or the courts,” Ralls wrote. “The Senators’ message is clear: USCIS had it right the first time.  We hope the Administration agrees.”

Attorney Lavi Soloway, who has been litigating several of these cases and co-founded Immigration Equality, went further, telling Metro Weekly, “I am grateful to Senator Kerry and all twelve Senators for their aggressive response today. Gay and lesbian binational couples need executive branch action now. We must stop this government from tearing apart these families.”

Soloway — who started the “Stop the Deportations” project in 2010 — continued, “It is vitally important that DOMA related deportation proceedings be terminated or adjourned, that a moratorium on removal orders be instituted and that no petitions or applications for permanent resident status filed by married gay and lesbian couples be denied because of this unconstitutional law. The Department of Homeland Security and the Department of Justice must move swiftly to develop policy in response to this letter to prevent imminent deportation in numerous pending cases.”]