The best usually comes around with the worst. In business, when these opposites combine, prospects for good business deals arise. Such is the case with Long View Gallery. The gallery opened in D.C. in 2006 in the midst of the revitalization of 9th Street NW. Three years later, the lease was up, the economy had tanked, and 9th Street had yet to become the urban playground developers had banked on. Rather than become a casualty of the bad economy, Long View Gallery not only moved to a new location – it expanded. 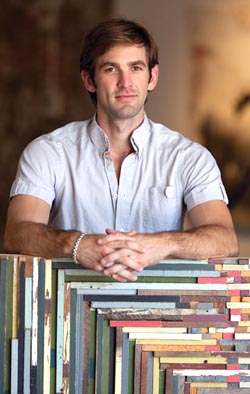 ”We adopted a new business model based on our experience in a smaller gallery where we had frequently been asked to host events,” says gallery director Drew Porterfield. The revamped business model draws elements from the country store: welcoming and casual. There’s the museum, where events for large groups are often hosted, and the art gallery, a venue to showcase and promote the work of artists.

In October 2009, the rebranded Long View Gallery opened at a new space at 1234 9th St. NW, across from the Walter E. Washington Convention Center. Counterintuitive as it may seem, part of the success of Long View Gallery is the choice to invest when the going was tough.

”Foot traffic was a big issue for us. We needed to bring people to the space to promote the work of our artists, and having a space where many events are held has the additional benefit of providing that for us,” explains Porterfield, whose academic background is in math and photography. Bringing people to the gallery – lots of people – has contributed to promote the area as a viable, safe location where businesses can thrive.

To keep the doors open, the gallery must be a profitable enterprise. Have they sold out to commercialism? To this, Porterfield remarks, ”The space is for rent; not the walls, which is reserved for the art and the artists. The events bring people to the space and see the art. It’s a win-win-win proposition.”

It’s social media, now a significant segment of the way we communicate, if in dribs and drabs. The thing is, the generation that grew up on it is only now entering the work force and first adopters aside, the rest of us have to learn how to integrate social media into the way we do business.

So now that it’s time to ”get with the program” – or else. But what to do? Whose advice to take? Will you have to mortgage the house in Rehoboth to be able to have an intelligent cocktail party conversation?

Put your fears aside. The Capital Area Gay & Lesbian Chamber of Commerce’s First Friday luncheon on June 3 – ”I Can’t Believe It’s on Twitter: Getting ROI From Social Media” – will feature social media experts Thomas Sanchez and Anthony Shop of Social Driver sharing their insights on how to ”Get With The Future,” their company’s tagline. They will explain how in less than a decade the two traditional ways to reach an audience – paid media and earned media – have been supplanted by a third emerging category: owned media. This shift has changed how political campaigns, nonprofit organizations and corporations must develop and deploy their communication strategies. By understanding these changes, your own organization will be on the right track to aligning strategy with vision.

Space is limited, so register now at caglcc.org/FirstFridayJune.