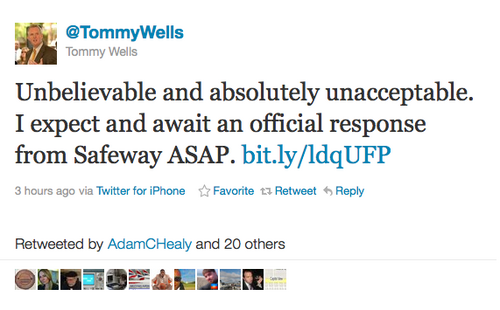 An incident involving a supermarket, a D.C. gay couple, an epithet and an apology grabbed the attention — and the Twitter feed — of a member D.C. City Council this evening.

D.C. City Councilmember Tommy Wells (D-Ward 6) reacted today to news that a gay couple had been called “faggots” over this past weekend by a cashier at the Safeway grocery store at 1100 4th St. SW, located in his ward, by taking to Twitter and calling the incident “unacceptable.”

Referencing Metro Weekly‘s report from earlier in on June 15, Wells wrote at a little before 9 p.m., “Unbelievable and absolutely unacceptable. I expect and await an official response from Safeway ASAP.”

Hours after Metro Weekly reported on Jason Morgan and Brendan Harrington’s story, a local D.C. resident, Andrew Kloman, went to the Safeway store where the incident occurred and videotaped the cashier apologizing.

As of midnight on Thursday, June 16, the Safeway Eastern Division public affairs office had not responded to a Metro Weekly inquiry seeking comment. When speaking to Metro Weekly, the manager at the Safeway store, Michael Bigelow, declined to comment, referring questions to that office.