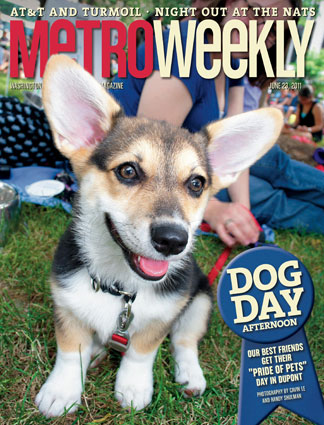 Dupont Circle went to the dogs on Saturday, June 18, during the 18th Annual Pride of Pets Dog Show, benefiting Pets-DC, the 20-year organization helmed by Chip Wells that assists pet owners suffering from AIDS-related and other life-threatening illnesses. There was plenty of canine spectacle on display for both the assembled crowd and participants as the pups vied for honors such as “Best Tail Wagging,” “Least Obedient” and “Most Affectionate.”

This year’s event benefited from a relatively brief run time (just over two hours) and pleasant weather. It wasn’t sunny, exactly, but it wasn’t broiling as in years past. Various breeds of dogs – from Labradors to terriers to mutts of extremely mysterious origin – paraded around the cordoned-off ring, as judges JoAnn Kokindo of BHT, Dr. Katie Stembler and Nellie’s bartender Adam Giammarinaro awarded the trophies and ribbons in the 16 categories.

In all, you could say it was the perfect dog day afternoon.

Randy Shulman is Metro Weekly's Publisher and Editor-in-Chief. He can be reached at rshulman@metroweekly.com.
← Previous Story A Charming Pride
Next Story → Secrets of the Skies