”For me, music has always been about the opposite of [my] parents,” says singer-songwriter Dan Fishback. ”I listened to music as a teenager to escape them.” 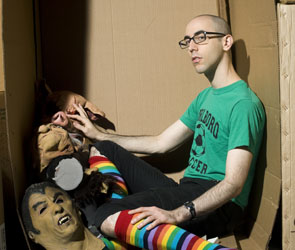 But he can’t escape them anymore.

The New York-based Fishback, a native of Olney, Md., returns to D.C. next Wednesday, June 22, to perform as part of the Washington Jewish Music Festival.

”I’m a little weirded out,” says the queer singer-songwriter, ”knowing that my parents are coming to the show and bringing their friends. That they’re going to be in the audience listening to me singing really frank, honest songs about my personal life.”

The 29-year-old got his start as a singer-songwriter while an anti-war student activist at the University of Pennsylvania. But soon after he moved to New York in 2003, he became a key figure in the city’s ”anti-folk scene.”

The moniker describes more of a sensibility than a style or genre.

”[Anti-folk] was more like an orphanage for songwriters who didn’t really fit into other genres,” says Fishback. ”And people who prioritized attitude and honesty and content over being able to play your guitar really well, or being able to hit your notes really well.”

”I think I have a pop sensibility,” he says when asked to describe his music, ”but my style is a little more ragtag.”

In recent years, Fishback has focused on developing independent plays and one-man theater productions. He expects to perform from a mix of his music and his plays at his hometown show, sponsored by the Washington DCJCC’s LGBT GLOE group.

There will also be cursing. And his parents, who Fishback says are big gay rights supporters, actually frown on that, which causes him angst.

”They don’t like that I say fuck,” he says. ”In preparing for the show, I feel like I’m regressing to my bratty teenage years,” he says with a chuckle. ”Don’t tell me what to do, Mom!“