A Maryland immigration judge issued an order on June 24 reopening Rodrigo Martinez’s immigration case “in the interest of justice.” The unusual move — or at least a footnote in the order — reflects the uncertain nature of immigration cases for bi-national, same-sex couples in the wake of rapid changes regarding the constitutionality of the Defense of Marriage Act.

The order reopening his case, a copy of which was obtained by Metro Weekly, cancels Martinez’s pending order of removal. Martinez, who is legally married to Edwin Echegoyen, narrowly avoided deportation earlier this year when a stay of the removal order was granted.

The reopening of the case came sua sponte — or on the judge’s own accord — according to the order, which Immigration Judge Lisa Dornell wrote was being done to give Martinez “an opportunity to present additional evidence on country conditions in support of an application for withholding of removal under the [Immigration & Naturalization Act].” 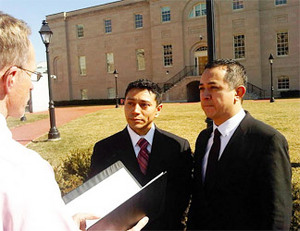 Dornell then wrote in a footnote to the order, “The parties shall also be prepared to address current policy and/or legal developments relating to the ability of same-sex spouses to benefit from visa petitions filed by United States citizen spouses.”

The couple is one of several bi-national, same-sex married couples who have received attention this year, particularly after the Department of Justice’s Feb. 23 decision that the Defense of Marriage Act — which has prevented the Department of Homeland Security from considering green card applications based on marriage for those couples — is unconstitutional and will no longer be defended by DOJ in court.

Martinez’s attorney, Lavi Soloway, tells Metro Weekly, “Our argument is that prosecutorial discretion is proper in these cases in large measure because the administration’s own position is that Section 3 of DOMA is unconstitutional.”

Following the expansive DOJ filing on July 1 in Karen Golinski’s case seeking equal health insurance coverage for her wife as would be given to an opposite-sex spouse, Soloway — who started Stop the Deportations in 2010 with his law partner — says of the change from the Feb. 23 decision to the July 1 brief, “That has been expanded from one letter to a 31-page brief. It’s just becoming abundantly clear that the administration is aligned with our side and with the side of the plaintiffs in the DOMA cases.

“And, in the context of immigration court, it has discretion to protect couples while still enforcing DOMA,” he says, adding, “The Golinski brief really strengthens our request. It’s hard to argue back … there’s really significant meat on the bone with the Golinski brief. We’re going to look forward to having that conversation with opposing counsel with the Golinski brief as yet another point of discussion.”

Martinez and Echegoyen are not alone. In recent months, several same-sex couples — many of whom are represented by Soloway and are part of the Stop the Deportations project — have had deportation proceedings continued or canceled, including Henry Velandia, a Venezuelan citizen, and his husband, Josh Vandiver.

As The New York Times reported this past week, “federal officials … canceled the deportation of a Venezuelan man in New Jersey who is married to an American man.” There, “Jane H. Minichiello, the chief counsel at the Newark office of Immigration and Customs Enforcement, an arm of the Homeland Security Department, inform[ed] [Soloway] that the agency had agreed to his request to close the deportation proceedings. According to Mr. Soloway, Ms. Minichiello said pursuing Mr. Velandia’s deportation ‘is not an enforcement priority at this time.'”

Of the cases — and the couples’ new-found success at getting immigration judges to listen — Soloway said, “I think that these individuals are making the right arguments at the right time.

“I think we’ll see more of this, but I also think there will be times when opposing counsel [with DHS] won’t necessarily agree. But, we certainly would hope that we’ll have abundant opportunity to bring forward all elements of the argument — including the Golinski brief and any future briefs — to persuade the other side, at the very least, to agree to continuances [to prevent deportations].”

[Photo: Edwin Echegoyen, left, and Rodrigo Martinez are married in the District on March 1 (Photo provided by the DOMA Project.)]