Obama Addresses American Legion, With No Mention of DADT Repeal — or Group’s Opposition

Three weeks from today, the U.S. Armed Forces will begin living in a post-“Don’t Ask, Don’t Tell” world. The 60-day congressional review period will have passed since President Obama, Defense Secretary Leon Panetta and Joint Chiefs of Staff Chairman Adm. Mike Mullen certified on July 22 that the military was ready, under the terms of the Don’t Ask, Don’t Tell Repeal Act, to end the 1993 law banning out gay, lesbian and bisexual servicemembers. 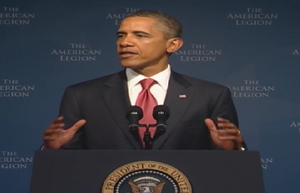 Today, however, President Obama addressed the American Legion, the nation’s largest veterans organization and an organization that has steadfastly opposed ending DADT. He did not, however, mention the policy or its coming end — or the group’s opposition to its end.

Speaking about efforts and successes of the military in the world after Sept. 11, 2001, Obama told the roughly 6,000 people attending the American Legion National Convention in Minneapolis, “Credit for these successes, this progress, belongs to all who have worn the uniform in these wars.”

Later, he said, “As today’s wars end, as our troops come home, we’re reminded once more of our responsibilities to all who have served. For the bond between our forces and our citizens is a sacred trust. And for me and my administration, upholding that trust isn’t just a matter of policy. It’s not about politics. It’s a moral obligation.”

Yet, Servicemembers Legal Defense Network communications director Zeke Stokes tells Metro Weekly that “the American Legion is behind the curve on the issue and out of step with the American people and the views and recommendations of the nation’s top military leaders” regarding DADT.

On July 7, the day after the U.S. Court of Appeals for the Ninth Circuit temporarily lifted the stay on U.S. District Court Judge Virginia Phillips’s order banning the military from enforcing DADT, the American Legion issued a news release urging the Obama administration to appeal the decision.

With the news release noting that “[t]he American Legion has been voicing its concerns about the repeal of DADT for the last two years,” American Legion National Commander Jimmie L. Foster, said in the release, “Micro-managing military policies by judicial fiat ignores the authority of our military leadership and circumvents the military’s own Uniform Code of Military Justice. If we as a nation allow judges to institute military policy, we diminish the roles of the Secretary of Defense, the Joint Chiefs of Staff, Congress and the constitutionally mandated role of the nation’s commander-in-chief. Simply put, the military’s role is to fight and win our nation’s wars. Judges lack the expertise on how to best do this.” 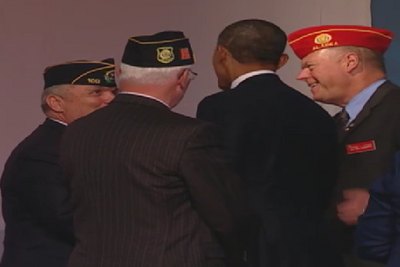 Despite the American Legion’s continued opposition to DADT repeal, the secretary of defense and chairman of the Joint Chiefs of Staff supported the DADT Repeal Act passed by Congress and signed into law by Obama in December 2010.

“The American Legion has some concerns about how the new policy will be implemented,” he said. “We’re particularly concerned about military chaplains and those who may hold some strong beliefs that they not be penalized for those beliefs.”

“The national headquarters of the American Legion does not ask the question. As far as the general criteria, if they’re an honorably discharged wartime veteran and meet the criteria of the American Legion, they can join,” he said. “We don’t have any criteria [regarding sexual orientation]. There are self-identified gay posts. One is San Francisco.”

Stokes pushed for more, telling Metro Weekly, “At SLDN, we urge the American Legion and its leadership to revisit positions and past statements on LGBT military service and work to create a welcoming and inclusive environment for gay and lesbian patriots who may want to be a part of the nation’s largest veterans’ service organization.”

Those past statements include — more than six months after the repeal bill’s passage — Foster’s continued strong criticism of DADT repeal itself, as opposed to implementation questions discussed by Raughter today.

“The U.S. Army and U.S. Marine Corps have been bearing the brunt of the combat, yet last year both of their service chiefs testified in favor of keeping DADT,” Foster said in the July release. “In fact, we agree with Marine Gen. James Amos who testified that the policy should not be based on ‘a social thing. It’s combat effectiveness.'”

Amos, in congressional hearings this year, however, has stated that repeal implementation was occurring with little or no problems, noting on April 7, “There’s not been pushback … or anxiety from the forces in the field.”

Today, Foster introduced Obama, who finished speaking 34 minutes later without a mention of the DADT repeal set to take effect on Sept. 20.

UPDATE @ 2:55P: In response to a request for comment, White House spokesman Shin Inouye wrote to Metro Weekly, “The President recognizes that veterans come from all walks of life and from every background.  He was proud to sign the Don’t Ask, Don’t Tell Repeal Act into law and to certify that the conditions for repeal have been met. Come September 20th, our military will no longer be deprived of the talents and skills of patriotic Americans just because they happen to be gay or lesbian.”