Home / Features / The Rules of Warcraft

The Rules of Warcraft

Sometimes it's not the action but the fellowship that's addictive

He doesn’t care about fantasy themes or the storyline behind World of Warcraft — for Mike Larson, it’s the social aspect of the game, the camaraderie, that keeps him coming back.

”I have played with [these people] for the past five years,” he says of his co-combatants in the massively multiplayer online role-playing game. ”I’ve met some of them, we’ve had gatherings a couple of times. A lot of them I’ve never met, but I know them from playing with them.” 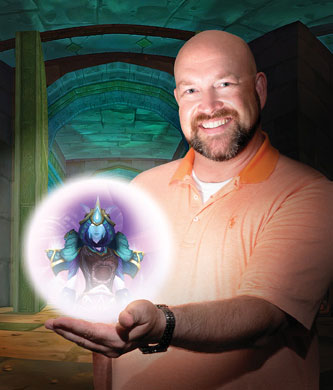 If you’ve never played Warcraft, you probably don’t know that the game has more than 11 million subscribers to its online realm, according to the game’s publisher, Blizzard Entertainment.

Some of its LGBT subscribers play as part a ”gay guild,” such as the one that goes by the cheeky moniker ”The Spreading Taint.” But while The Spreading Taint claims thousands of members, Larson prefers playing on a much smaller scale with his own guild, the Corps Walk Heroes. They’re mostly Larson’s friends, including three other gay players.

Larson and his fellow guild members have met on several occasions at real-world gatherings all across the country. But the real action happens online.

”We’re doing what’s called ‘raids,’ where we go in fighting [the game’s high-level] bosses. That’s the second thing I like about the game: figuring out how to accomplish our goal.”

He laughs about the voluminous history and lore that forms the background to the game: ”I could care less about the whole story. I hate science fiction. I’m like, Lord, get rid of it!”

Instead, Larson uses the game in a completely social way. He began playing the game in 2000 when his two best friends, a straight couple, moved from the D.C.-area to Detroit. They introduced him to Warcraft as a way to stay connected.

”I had never played any type of game before,” he says. ”They got me turned on to it.”

Warcraft characters encompass a range of ”races,” from traditional human to pointy-eared troll, from sultry elves to bullish Tauren. Larson’s main character is of the horn-headed Draenei; his role is a priest, who serves as a healer to his party.

”I don’t actually do much damage, but I’m healing the other players so they can continue to kill the boss.”