Writing that he was bound by a 1982 appeals court decision whose reasoning the U.S. Department of Justice had argued was “no longer valid today,” U.S. District Court Judge Stephen V. Wilson dismissed an immigration case challenging the Defense of Marriage Act brought by Indonesian citizen Hamdi Lui and his American husband, Michael Ernest Roberts.

The news, first reported by The Advocate‘s Andrew Harmon, means that the House Republican leadership, whose 3-2 control of the Bipartisan Legal Advisory Group has allowed it to intervene to defense DOMA in court challenges in recent months, secured its first court win in defense of the 1996 law. 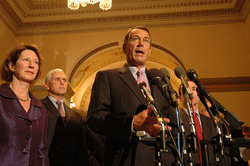 The win, though, was a limited one — as Wilson wrote that the previous appellate court decision controlled his decision and, thus, he could not consider the merits of Lui and Roberts’s case arguing that Section 3 of DOMA, the federal definition of marriage, is unconstitutional.

Wilson, in discussing the claims raised by Lui and Roberts, wrote in an order issued on Sept. 28, “To the extent that Plaintiffs Challenge Section 3 of DOMA on equal protection grounds, that issue has been decided by [the 1982 case,] Adams [v. Howerton].”

As Metro Weekly reported on Sept. 6, DOJ — which announced on Feb. 23 that it was stopping defending DOMA in court challenges — faulted BLAG in a filing in the case for relying ”[t]hroughout their brief” on Adams — a case decided by the U.S. Court of Appeals for the Ninth Circuit, which includes the California federal court where Lui and Roberts’s case is being heard. The appeals court held in the case that “Congress has determined that preferential status is not warranted for the spouses of homosexual marriages.”

The DOJ lawyers argue, however, that ”[t]he reasons the Ninth Circuit Court of Appeals affirmed the denial of immigration benefits in Adams are no longer valid today,” citing changed laws — at the time of the opinion there was a statutory exclusion in the Immigration and Nationality Act for “homosexual aliens” — as well as “intervening events and changing legal and social understandings.”

Wilson, though, found that the 1982 decision constrains him — as a trial court judge — from being able to make a decision on the question raised by Lui and Roberts without deferring to the Adams decision from the appeals court.

“While Plaintiffs and Defendants point out the alleged deficiencies in the reasoning in Adams, this Court is not in a position to decline to follow Adams or critique its reasoning simply because Plaintiffs and Defendants believe that Adams is poorly reasoned,” Wilson writes in the order. “The Court feels bound by Ninth Circuit precedent, and believes that those precedents are sufficiently clear.”