Debate on DOMA Repeal Bill to Begin in Senate Committee on Nov. 3 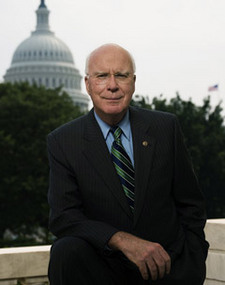 The Senate Judiciary Committee has set Nov. 3 for beginning the mark-up of the Respect for Marriage Act, a bill that would repeal the Defense of Marriage Act.

From Sen. Patrick Leahy (D-Vt.), the chairman of the committee:

Leahy announced the agenda Tuesday for the Committee’s November 3 executive business meeting.  The agenda includes a number of items held over from the panel’s last meeting, as well as the addition of the Respect for Marriage Act.

On Oct. 14, Leahy announced that the committee would be holding a mark-up session and vote on the bill. The bill, introduced by Sen. Dianne Feinstein, has 30 co-sponsors.

The House version of the Respect for Marriage Act, which was introduced by Rep. Jerrold Nadler (D-N.Y.), has 128 co-sponsors. Controlled by Republicans who are mounting a defense of DOMA in court, however, the House is unlikely to take action on the bill in this Congress.

The Obama administration supports the bill, a point Obama made in his Oct. 1 speech to the Human Rights Campaign. When there, he said, “I vowed to keep up the fight against the so-called Defense of Marriage Act.  There’s a bill to repeal this discriminatory law in Congress, and I want to see that passed. … I believe the law runs counter to the Constitution, and it’s time for it to end once and for all.  It should join ‘don’t ask, don’t tell’ in the history books.”