Two of the world’s three major religions – Christianity and Judaism – have made relatively great strides in welcoming LGBT people into their communities and in considering LGBT equality an issue of social justice. From Reform Judaism to the Episcopal Church, LGBT people should have no trouble finding a spiritual home.

The third leg of that trinity, Islam, has lately been making inroads of its own. Locally, much of that effort has been led by Daayiee Abdullah, raised as a Southern Baptist in Detroit and now an openly gay imam living in D.C.’s Shaw neighborhood. 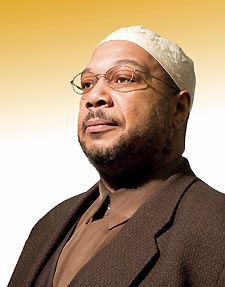 ”I’ve been part of Muslims for Progressive Values, their D.C. chapter,” Abdullah explains, adding that as the leader of the chapter he’s been offering a mosque prayer circle in Cleveland Park since January. ”We’ve been having our prayers every Friday.”

Since Oct. 1, he’s also been serving as MPV’s director of LGBT outreach.

Next week, locals will have a special opportunity to meet Abdullah and learn more about the LGBT-affirming, Los Angeles-based MPV. Monday, Oct. 24, MPV will hold a reception at the Human Rights Campaign headquarters with keynote speaker Rep. Keith Ellison (D-Minn.), an LGBT ally and the first Muslim elected to Congress.

”The things [Ellison] supports from a congressional position are the same things we support from a Muslim religious position,” says Abdullah. ”There are going to be several speakers there. … I’ve talked to some other gay church groups, as well as straight church groups like the Wileys [of Covenant Baptist Church]. Bishop [Kwabena Rainey] Cheeks, some of his people say they’re coming. It’s really for those who are progressive. Religious, non-religious, those interested in learning.”

The focus of the event is to raise funds for MPV’s ”Literary Zikr” project, which aims to make progressive Islamic theology widely available in plainly written English in an effort to counter radical Islamic theology, easily accessible online.

”That’s the difference between following a more orthodox line of understanding, or if you’re able to read the Quran yourself and think through the process,” Abdullah says. ”Often there’s no room for discussion in more orthodox situations. A person needs to understand what they’re reading. The issue that [the Quran must] be read in Arabic is incorrect.”

While the fundraiser and Literary Zikr have their roles to play in offering a progressive, LGBT-affirming, interpretation of Islam, relative to the long histories of these ancient religious traditions these steps may be considered baby steps. But even baby steps are a crucial juncture of development.

”People should know that there is a place that is inclusive,” Abdullah says of MPV generally and his Friday prayer circle specifically. ”Women and men and queer people and intra-faith – Sunni, Shia or whatever – we’re all-welcoming.”