More than 30 local activists representing a coalition of LGBT organizations protested in front of Metropolitan Police Department headquarters and the U.S. Attorney’s Office for the District of Columbia Nov. 17 to demand fair treatment of transgender individuals by police and increased efforts in solving and prosecuting crimes committed against transgender people.

The protest, the Transgender Day of Action, was organized to call attention to what activists deem an inadequate response to violence directed against members of the LGBT community. 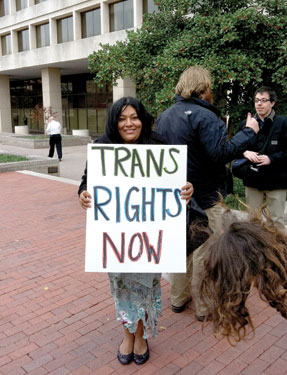 Protesters walked in a circle outside MPD headquarters chanting pro-equality messages and carrying signs reading ”Stop the Killings; Solve the Crimes,” ”The D.C. Human Rights Law is for All!” and ”Train All Police to Respect Transgender People.” The protesters then marched across the street to the U.S. Attorney’s Office, where five people displayed a large paper banner reading, ”End Transphobia Now!!!” while speakers addressed the crowd.

Event organizers also issued a list of demands and goals, which they submitted to the offices of MPD Chief Cathy Lanier; U.S. Attorney for Washington, D.C., Ronald Machen; and the 13 members of the City Council.

The list includes requiring LGBT sensitivity training for all MPD officers; closing what activists call a disparity gap between the clearance, or closure, rate of crimes against the transgender community and crimes overall; harsher disciplinary standards for officers failing to uphold the D.C. Human Rights Law; and better tracking and reporting procedures of cases involving transgender people, including referring to them by their preferred name and presenting gender.

”It’s gotten to a point now where something needs to be done,” said Xion Lopez, a transgender woman who addressed the crowd in front of the U.S. Attorney’s Office. ”I’m here because I’m standing up for my rights, not just for myself, but for all people of the LGBT community.”

The activists also called for the elimination of ”prostitution free zones,” which they believe to be unconstitutional and say encourages police to engage in discriminatory profiling. A recently introduced City Council bill, submitted by Councilmember Yvette Alexander (D-Ward 7), could make such zones permanent.

Janelle Mungo, a member of Get Equal DC and one of the organizers of the demonstration, said the prostitution-free zones are ”huge detriments” to the LGBT community.

”When you think about it in theory, it sounds nice,” Mungo said of the prostitution-free zones. ”But when you really dig down into it, it creates huge problems for the communities that live there, whether they are sex workers or just people in the area. It doesn’t create a safe environment. It creates a heavily policed environment, which creates a lot of aggression in the people, and it’s not safe. That’s why we need to educate the community about the real problems with these prostitution-free zones.”

In response to the demonstration, Lanier offered a statement, handed to protesters by MPD personnel, in which she reiterated both the MPD’s commitment, as well as her own, to protecting ”all members of our communities” and highlighting the department’s outreach to the LGBT community.

”An example of our efforts to improve our outreach is that we scheduled a series of open houses – the first being last night to introduce our GLLU affiliates to the community,” Lanier said in the statement. ”While 15 affiliate members were in attendance, no members of the GLBT community showed up. This has to be a partnership where efforts are made on both sides.”

The department has seven other open houses scheduled for November and December, one for each police district. Although none of the remaining MPD outreach events are specifically geared toward the LGBT community, the Gay and Lesbian Liaison Unit (GLLU) participates as a component of the Special Liaison Units (SLU) division, as was the case in the Nov. 16 open house cited by Lanier.

But the activists in attendance pushed back against Lanier’s statement, which many viewed as an attempt to discredit them.

”We’ve had those kinds of open houses and those meetings, and nothing comes of it,” Mungo said. ”They’re not highly publicized. It’s hard to know when they’re going on. When they are publicized and we do know of it, we send folks. Nothing comes out of it. It’s the same story over and over.”

Lanier’s statement also prompted a rebuttal from Get Equal’s Charles Butler: ”We had 30 people show up at our event. You had none. Next time, if you contact us, we’ll help you with your P.R.”

Others attending the demonstration said they hoped there would be positive developments once public officials realized they are being held accountable for how they respond to crimes against transgender people.

”I think this is a problem with individual officers on the streets, which is a training problem, which is also a leadership problem,” Clay said. ”We need to system-wide try to address these issues, do system-wide trainings, and give officers the tools they need, which they often don’t.”

Clay added that, as a community activist, she used to have a good working relationship with the GLLU officers, but feels the decision to change how the unit operates by focusing more on affiliate officers in each of the seven police districts instead of a centralized unit has harmed its ability to provide culturally sensitive service to LGBT crime victims.

Also attending the rally were five high school students representing the Gay-Straight Alliance of Washington-Lee High School, in Arlington. The students said they came because they wanted to support members of the transgender community and were particularly influenced by the attack last April against transgender woman Chrissy Lee Polis in a Baltimore-area McDonald’s restaurant, as well as anti-transgender shootings in the District.

”Honestly, I think people are more indifferent to trans rights than anyone else in the LGBT community, just because there’s a lot of misinformation about it and people cling so tightly to their ideas of gender norms and gender roles,” said 15-year-old sophomore Gwen Yamanaka. ”So there’s a lot of ignorance, a lot of indifference. It’s really easy for people not to care or be against us.”