Following his keynote speech at the eighth annual National Center for Transgender Equality Awards Ceremony, Donovan made his marriage comments at the Mayflower Hotel at the end of an interview focused on the agency’s advancements towards ending anti-LGBT discrimination in housing. 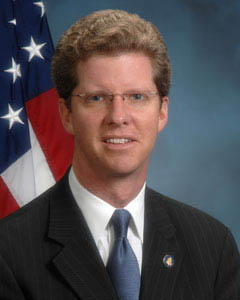 Asked about this summer’s passage of marriage equality in New York, Donovan says, ”I was enormously proud to be a New Yorker on the day that it passed. I actually worked for Andrew Cuomo when he was Housing Secretary. I worked for Mike Bloomberg who has been a constant supporter of the law – what is now law.”

He talked about how the law’s passage had affected those around him, saying, ”So many friends that I know were able to achieve a dream the day that law passed. And so many neighbors.

”It made me proud to be a New Yorker – not enough to get me to move back. We’ve got more work to do in the Obama administration in a second term.”

Donovan is the first cabinet secretary in the Obama administration to support marriage equality, despite the fact that his boss, President Obama, does not. Obama supports civil unions for same-sex couples and says he is ”evolving” on the issue. Although he maintains that the Defense of Marriage Act is unconstitutional and his administration has stopped defending it in court, Obama has faced criticism from some LGBT advocates and supporters for not supporting marriage equality.

Although Donovan is the first cabinet secretary to announce his position in support of marriage equality, Secretary of State Hillary Rodham Clinton called the New York vote ”historic” at an LGBT pride month reception co-hosted by the State Department and Gays and Lesbians in Foreign Affairs Agencies (GLIFAA) on June 27.

Saying the vote ”gives such visibility and credibility to everything that so many of you have done over so many years,” Clinton later noted how senators in New York spoke about family members impacted by restrictions on same-sex marriage and said, ”[F]rom their own personal connections and relationships, they began to make the larger connection with somebody else’s niece or nephew or grandchild and what that family must feel like.”

”This is clearly wonderful news,” Sainz told Metro Weekly. ”Like a growing majority of Americans, Secretary Donovan understands that all Americans should be treated equally, especially when it comes to marriage rights, and our work won’t be complete until we’re able to achieve those rights at the state and federal level.”

Evan Wolfson, the founder and president of Freedom to Marry, noted how he believes ending discrimination can play a part in increasing economic stability.

”I think Secretary Donovan understands that ending marriage discrimination would help families, while hurting no one, as people are hurting in these tough economic times,” Wolfson says. ”It is the right way to protect the love and the commitment that these couples are celebrating.”

”Secretary Donovan made LGBT history tonight. He became the first sitting cabinet secretary to address a national transgender equality organization as well as the first to express support for marriage equality,” he wrote to Metro Weekly. ”Secretary Donovan’s fearless commitment to our entire community and our multiple priorities is inspiring and demonstrates clearly that President Obama has made LGBT equality a priority throughout his administration. Democrats have long led on LGBT issues, but it’s always fantastic to see our party continuously stepping forward.”

Earlier in the interview with Metro Weekly, Donovan referenced how the civil rights movement – and specifically ending discrimination in housing – is his passion and led him to speak at the NCTE event.

”I think the broader issue is that one of the things that has always made me passionate about housing and that got me interested in housing in the first place is that I was a student of the civil rights movement … and feel that housing is such a basic gateway to opportunity in our country,” he says. ”When you buy a home, you don’t just buy a home. You choose where your kids are going to go to school, you choose access to jobs, you choose public safety … . You choose so much when you choose a home.

”So, anything that denies access to a home to an American is an issue of basic civil rights. … Coming here tonight is about engaging and making sure we’re pushing forward on one of the frontiers of civil rights in our country right now, and that’s pretty fundamental to the work that we do.”

UPDATE: The White House had no comment on Donovan’s marriage remarks.