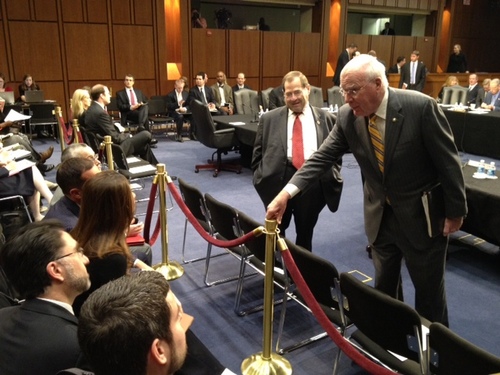 [Photo: Senate Judiciary Committee Patrick Leahy (D-Vt.) talks with Human Rights Campaign president Joe Solmonese and legislative director Allison Herwitt, with Rep. Jerrold Nadler (D-N.Y.) at his side before the start of the committee’s Nov. 10, 2011, business meeting. The Respect for Marriage Act is to be voted on at the meeting. (Photo by Chris Geidner.)]

Today, the Senate Judiciary Committee passed the Respect for Marriage Act out of committee on a party-line vote, although Republicans on the committee repeatedly said that they did not expect the full Senate to take up the bill, which would repeal the Defense of Marriage Act, in the 112th Congress.

After less than two hours of discussion, the Democratic members of the Senate Judiciary Committee passed the Respect for Marriage Act on a 10-8 vote. No Republicans supported the measure; all Democrats voted for it.

In expressing his opposition to the bill, Sen. John Cornyn (R-Texas) spoke about the costs of expanding federal benefits to same-sex couples but also said that Senate Majority Leader Harry Reid (D-Nev.) would not hold a vote on the RMA in the 112th Congress because “he would face a revolution in his own caucus.”

That, however, prompted Sen. Dick Durbin (D-Ill.), who had voted for DOMA in 1996 but now says he was “wrong” and supports the RMA, to say, “If this is brought to the floor, and only the 30 co-sponsors vote for it, it is worth it.” Durbin is a member of the Senate Democratic leadership, serving as the majority whip.

The committee vote, regardless, was historic as it was the first congressional vote in support of ending the 1996 law, which defined marriage in federal law and purports to shield states from needing to recognize marriages entered into elsewhere.

Committee Chairman Patrick Leahy (D-Vt.) opened the meeting this morning by talking about his pride in his home state of Vermont for having “long taken an active role in America’s journey to build a more just society.”

Talking about the state’s history of passing civil unions and now marriage equality for same-sex couples, Leahy said of DOMA, “[T]housands of American families are now being treated unfairly by their federal government.”

If the committee votes in favor of the RMA today, Leahy said it will represent “the next step on the path toward equality.”

Of the states’ historic role in marriage definition determinations, Sen. Dianne Feinstein (D-Calif.) — the lead sponsor of the RMA — opened her remarks by saying, “DOMA infringes on this state authority.”

Feinstein then went through a set of disadvantages that DOMA causes for corporate America, relying in part on the court filing made by companies from Xerox to Google in the U.S. Court of Appeals for the First Circuit this past week supporting the trial court ruling in Gill v. Office of Personnel Management that struck down the federal definition of marriage contained in DOMA as unconstitutional.

Human Rights Campaign president Joe Solmonese attended the vote, along with several other HRC staff members, as did representatives from the ACLU, National Center for Lesbian Rights and National Gay & Lesbian Task Force.

In a statement released following the vote, Solmonese said, “We thank the members of the Judiciary Committee who stood up for LGBT families and particularly thank Chairman Leahy and Senator Feinstein for their leadership in fighting this unjust law.”

“President Obama applauds today’s vote by the Senate Judiciary Committee to approve the Respect for Marriage Act, which would provide a legislative repeal of the so-called ‘Defense of Marriage Act,'” Inouye said in a statement. “The President has long believed that DOMA is discriminatory and has called for its repeal. We should all work towards taking this law off the books. The federal government should not deny gay and lesbian couples the same rights and legal protections afforded to straight couples.”

After Sen. Chuck Grassley (R-Iowa), the ranking minority committee member, noted that “For thousands of years … marriage was an exclusively heterosexual institution” — a point later questioned by Sen. Al Franken (D-Minn.) — the Iowa senator referenced a column by The New York Times‘s Frank Bruni to suggest that even the “liberal” magazine has highlighted black leaders’ uncomfortability with marriage equality.

In the column, however, Bruni prasied the Human Rights Campaign’s “Americans for Marriage Equality” project for highlighting black Americans who have been prominent supporters of marriage equality.

In a statement released this afternoon, one of those referenced in Bruni’s column and discussed by Grassley today, Leadership Conference on Civil Rights president Wade Henderson, struck back.

“Senator Charles Grassley chose to misappropriate and misconstrue statements attributed to me in a news article in order to make an illegitimate case against equality for LGBT Americans. He was wrong,” Henderson said. “Marriage equality is a civil rights issue and I am a supporter of marriage equality.”

After testimony from all attending senators, Grassley said, “We know where the votes are,” and, accordingly, the minority will be offering no amendments. Three potential amendments, only one of which related to the RMA’s purposes, were circulated to committee members on Nov. 9 but not offered today.

The bill now goes to the full Senate, where Reid would have to choose to place it on the calendar for debate, which would need to be accepted by unanimous consent or on a motion to proceed, or a senator would have to bring it up as an amendment to other legislation. A motion to proceed takes only a majority vote, but it is subject to a filibuster — which could mean proceeding would require 60 votes.

[NOTE: This post was originally posted at 10:25 a.m. and updated throughout the hearing. The final update was made at 4 p.m.] 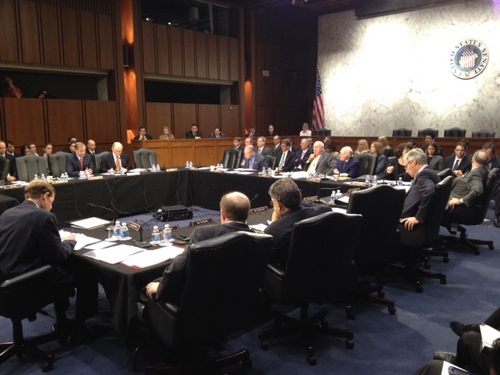