Today, lawyers for Servicemembers Legal Defense Network took the next step in their lawsuit challenging the constitutionality of unequal spousal benefits granted to servicemembers in same-sex marriages, arguing in federal court in Massachusetts that “American service members and their families are among [the Defense of Marriage Act]’s victims, and our national security may suffer as a result.”

Telling the court that there are no facts in dispute in the case, SLDN lawyers argue that the court should rule on the legal issues in the case and decide those issues in SLDN’s favor. On Friday, Nov. 18, however, the Republican leadership-controlled House Bipartisan Legal Advisory Group filed a notice before the court announcing that, should the federal government decline to defend DOMA in this case as it has done in other cases challenging DOMA, BLAG stands ready to seek intervention to do so itself. 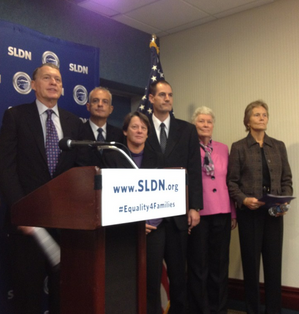 The lawsuit, which challenges the application of the Defense of Marriage Act to provisions of federal law that detail military benefits, was brought by SLDN on Oct. 27. In today’s filing, SLDN’s lawyers argue that the inability of LGB servicemembers to get spousal benefits for their same-sex spouses violates several constitutional mandates, including the Due Process Clause of the Fifth Amendment; limitations on congressional authority in Article I of the Constitution and the Tenth Amendment; prohibitions on conditions placed on federal benefits; and prohibition on Bills of Attainder, which the lawsuit defines as “any law that legislatively determines guilt and inflicts punishment upon an identifiable individual without provision of the protections of a judicial trial.”

In today’s filing, SLDN lawyers take aim at DOMA by applying the same principles to the now-LGB-inclusive Armed Forces that were long used by opponents of out LGB servicemembers to implement and then keep “Don’t Ask, Don’t Tell” in place.

Any claim that DOMA, as applied to military spousal benefits, survives rational basis review is strained because paying unequal benefits to service members runs directly counter to the military values of uniformity, fairness and unit cohesion. While there was once a debate as to whether gay and lesbian service members should be allowed to serve openly in the armed forces — just as there were similar debates regarding integrating the military by race and then by gender — there never has been any debate as to whether similarly situated service members who do the same work deserve the same benefits.

Among the benefits denied to same-sex couples currently and at issue in the lawsuit are medical and dental benefits, basic housing allowances, travel and transportation allowances, family separation benefits, military ID cards, visitation rights in military hospitals, survivor benefit plans, and the right to be buried together in military cemeteries.

It is unfortunate that the United States has struggled with whether the admission of certain classes of its citizens into the military would threaten unit cohesion — whether that involved race, gender or sexual orientation — but there never has been any debate over the fact that unit cohesion would suffer if a class of citizens was allowed to serve but nonetheless was treated differently. Once admitted, all service members must be treated equally to maintain unit cohesion.

The defendants, Attorney General Eric Holder, Defense Secretary Leon Panetta and Veterans Affairs Secretary Eric Shinseki, are yet to file any defense in the case, and SLDN lawyers stated in the initial complaint that they did not expect the government to defend DOMA’s restrictions.

Spokespersons from the Department of Justice and Defense Department did not immediately respond to a request for comment about the government’s position on the case.

SLDN’s lawsuit, McLaughlin v. Panetta, was filed in the same federal court where Gay & Lesbian Advocates & Defenders filed a challenge to Section 3 of DOMA in a non-military context. That lawsuit, Gill v. Office of Personnel Management, resulted in a decision at the district court that Section 3 of DOMA is unconstitutional and is cited throughout today’s filing. A similar decision was reached in the court in a related case, Massachusetts v. United States, which was brought by Massachusetts Attorney General Martha Coakley (D). Those decisions are now on appeal before the U.S. Court of Appeals for the First Circuit, where DOMA is being defended by BLAG.

Neither a spokesman for House Speaker John Boehner (R-Ohio) nor the lead attorney hired to represent BLAG immediately responded to a request for comment about whether the government had informed them about the government’s position on the case. As of the Nov. 18 filing by BLAG, the government had not informed BLAG of its position.

District Court Judge Joseph Tauro, who decided the Gill and Massachusetts lawsuits at trial, was initially assigned the McLaughlin case as well. On Nov. 9, according to the court docket, the case was reassigned to Judge Richard G. Stearns. No reason was given for the reassignment.

[UPDATE: This post was updated at 9 p.m. to include information about BLAG’s Nov. 18 filing.]

[Photo: Servicemembers Legal Defense Network executive director Aubrey Sarvis, left, speaks at a news conference on Oct. 27, 2011, announcing the organization’s filing of a lawsuit challenging the Defense of Marriage Act, as several of the lawsuit’s plaintiffs wait to speak. (Photo courtesy of SLDN.)]