Growing up in a small town in central Florida, Kalup Linzy was obsessed with soap operas.

”In high school, I ran track and watched the Guiding Light [once home],” he says. ”The days I made an error on the VCR and it didn’t record, I was so pissed off, because you were never going to see it again.”

Ah, the perils of soap fandom before the Internet and SOAPnet. And what about before television? ”My great-grandmother listened to Guiding Light on the radio,” Linzy says. 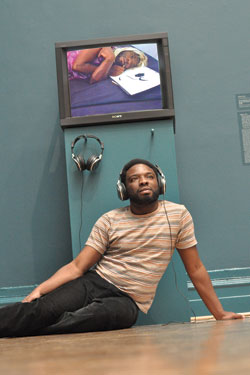 Kalup Linzy at the Corcoran Gallery of Art

So strong was the family devotion to soaps, Linzy was encouraged as a kid to make his own.

Linzy would enlist his sister and three or four cousins to be soap stars with him, all filmed using the family’s shoddy video camera. Ultimately, it became more than just family entertainment. Linzy eventually made a video for his environmental science class in high school, which earned him an A and started a tradition: ”Rather than write a paper, my teachers would let me turn in a video,” he says.

Linzy fancied himself as a kind of soap opera Spike Lee. ”He had all these movies coming out,” Linzy says of Lee in the early ’90s, ”and I remember people having all these discussions [provoked by his work].”

Now, people are talking about Linzy’s work — particularly about how he has turned his lifelong obsession with lowbrow soap operas into a career.

Linzy factors into the ”30 Americans” traveling exhibit recognizing leading African-American contemporary artists now at the Corcoran Gallery of Art. Produced by Miami’s Rubell Family Collection, the exhibit includes several gouache paintings by Linzy, but front and center are examples of Linzy’s melodramatic, intentionally cheap-looking serialized short videos, in which Linzy plays several characters, both in and out of drag. With soap-spoofing titles such as All My Churen and As da Art World Might Turn, the work calls to mind John Waters more than Spike Lee. It’s over-the-top outrageous, but it also shows Linzy’s genuine love for everything he’s sending up.

Linzy, a past Guggenheim Fellow, has also featured in exhibitions at the Whitney Museum of American Art and the Museum of Modern Art, both in New York, where the 34-year-old has lived for nearly a decade. Linzy, who is gay, is still close to his closely knit family in Stuckey, Fla., which lies between Orlando and Tampa. And they’re supportive of his art. ”I sort-of came out [to them] through the character Taiwan,” Linzy says, about the character with whom he most identifies. ”He was like the quiet child, that sort of didn’t have a voice, but then I made him a soul singer to give him the voice of expression. He was just like the gay child that blossomed.”

Linzy doesn’t just want to be known for what he jokingly calls ”crazy art videos.” In fact, he intends to start making feature-length ”art house films.” And while he doesn’t intend to alter his standard DIY aesthetic, he’s hoping to reach beyond just the art world and attain wider distribution. ”I want a Netflix film,” he laughs.

Last year, Linzy actually starred in his first honest-to-goodness soap opera — at the behest of actor James Franco. Franco, who met Linzy at a lecture the artist gave at Columbia University, suggested Linzy appear on General Hospital, where Franco plays a recurring character. ”I was in Candyland,” says Linzy, who appeared in four episodes as Kalup, essentially an amalgam of the characters in Linzy’s soap spoofs. ”It was completely surreal.” It also caused him some angst. ”What do I do with my work now? ‘Cause I was never supposed to get on a soap opera — that’s the point of doing my own.”

Another minor detail that caused some angst: the network on which General Hospital airs. Says Linzy, ”I hope my great-grandmother will forgive me for being on an ABC soap and not a CBS soap.”