This morning, Richard Socarides, the president of Equality Matters over the past year since Media Matters announced its creation, announced that he is leaving the organization, as is former Advocate reporter Kerry Eleveld. 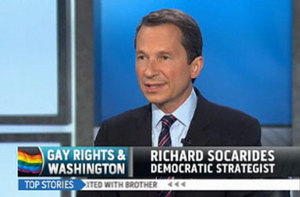 In a statement, Socarides said, “I am very grateful to have had the opportunity to lead Equality Matters during its first year. I’ve decided to return full time to New York and my law practice and activism there, at the end of the year, This has been an amazing year for our communities and LGBT rights. We have accomplished a lot this year, but have so much more to do. I look forward to being a part of it.”

Eleveld, the former Washington correspondent for The Advocate during the first two years of the Obama administration, said that she was going to be working on a book in the new year.

“I’m particularly proud of the work I’ve done during my fellowship at Equality Matters. I am grateful that I was given the chance to focus on in-depth reporting about serious issues affecting the LGBT community — and also to publish in places like The Washington Post, The Atlantic and The Daily Beast,” she said in a statement. “In the New Year, I look forward to working full time on a book about the past several years in LGBT history.”

Media Matters, which had earlier tapped former Servicemembers Legal Defense Network spokesman Trevor Thomas as the Equality Matters programs director, already had moved him into a role with responsibilities outside of Equality Matters.

In a statement, David Brock thanked Socarides for his work over the past year and said, “When we launched our Equality Matters initiative at the end of 2010, we were convinced that additional and focused resources in our core expertise areas — correcting conservative misinformation plus training and communications — could be put to use to help take advantage of a potentially historic and transformative moment in gay rights. One year later, we know we were right.

“We are proud of what we have accomplished in our first year and remain firmly committed to continuing this effort next year and beyond.”

It was not clear immediately what steps the organization would be taking to do so.

Meanwhile, The Huffington Post’s new Gay Voices section, which had been edited by Noah Michelson, is gaining another voice with the announcement that Michelangelo Signorile is the section’s new editor-at-large.

In an opening post at the site, Signorile writes, “I honestly can’t count the reasons why I’m thrilled to begin today as Editor-at-Large of HuffPost Gay Voices. This is a pivotal, exciting time for gay, lesbian, bisexual and transgender Americans. … To be able to help guide that discussion here at The Huffington Post is something most journalists and commentators would relish. But for someone like me, who has passionately covered gay culture and politics for just about two decades, it’s truly a great privilege.”