Just Not Working, HRC and GLAAD Up Campaign Against ABC’s New Sitcom

The new series, Work It, had already caused concern at LGBT organizations before ABC started promoting the series. But any behind-the-scenes worries broke out into the open when ABC published an ad for the show, set to premiere Jan. 3. 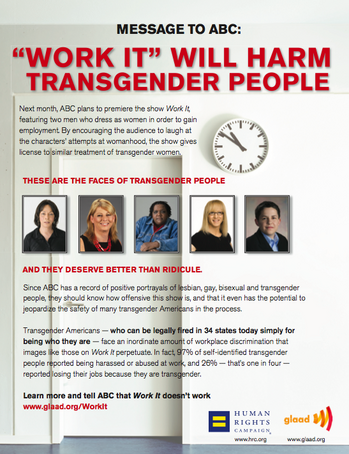 Today, the Human Rights Campaign and Gay and Lesbian Alliance Against Defamation ran a full-page ad in Variety regarding their concerns about the upcoming sitcom and organizations’ leaders published an op-ed at The Huffington Post about the show.

The Work It ad, which featured two men in women’s business skirts standing at urinals, was called “provocative” by EW.com‘s James Hibberd. At AlterNet, however, Genny Beemyn and Sue Rankin wrote about the new show, its ad campaign and the potential impact on transgender people. “[T]o transgender women, these images are no laughing matter,” they wrote. “Their femaleness is no masquerade, yet they often experience discrimination for not being able or not desiring to ‘pass’ as women.”

On Friday, Dec. 16, Variety reported that the network had agreed to meet with HRC and GLAAD to discuss the groups’ concerns.

GLAAD’s associate director of entertainment media, Matt Kane, wrote of the group’s concerns, “We ask that ABC … keep the show’s bathroom advertisement out of circulation, and seriously consider whether airing this show is worth the damage it has the potential to do. The fact is ABC should not air this show at all, as it will contribute to a climate in which transgender people are something to be laughed at, rather than treated with the respect and dignity that everyone deserves.”

In today’s op-ed, GLAAD’s Mike Thompson and HRC’s Joe Solmonese go further, writing, “The premise of this show is repulsive, and ABC — a network that routinely scores highly in GLAAD’s annual TV reports and whose parent company, Disney, receives a perfect 100-percent score from HRC’s Corporate Equality Index — should know better than to air it.”

Cathy Renna, having watched a re-shot version of the new show’s pilot episode, wrote at The Huffington Post, “After seeing the show for myself, the petitions by GLAAD, HRC, and others to get this program pulled make a lot of sense to me.”

Renna added to the discussion with another element, writing, “I’d love to be a fly on the wall when HRC and GLAAD — and hopefully others — meet with ABC, partly because I would love to hear their defense of this, and also because you just know some of the folks involved in this, from creators to actors, are members of the populations who are rightly up in arms.”

Over at AfterElton one headline asks, “What the Hell was ABC Thinking When it Greenlit Work It?” In the accompanying post, Heather Hogan concurred with the organizations and Renna, writing, “ABC should pull Work It from its roster immediately. It’s going to tank anyway, and canceling it before it airs is a perfect way to save face in several ways.”

Should ABC cancel “Work It”? Take our poll.

Get Poliglot in your inbox. Join our email list.