Over the weekend, two of Atlanta, Georgia’s most prominent, powerful and conservative public figures, Eddie Long and Herman Cain, announced that they would be stepping aside. Both men seemed to blame media scrutiny for causing their families pain as allegations of extra-marital affairs lingered on.

Eddie Long, the long-time head of the New Birth Missionary Baptist Church, claimed on Sunday that he would step away from the pulpit temporarily. To loud applause from his congregation, he said:

“I’m going to take a little time off to work with my family. While I do that, I need you to be here, and I need you to give more.”

Last year, Long denied accusastions by five young male church members that he manipulated them into sexual relationships. He remained as the head of his 25,000-member organization till now despite iPhone photos and detailed accounts of exchanging gifts for sex with the young men while on church grounds and during exotic vacations.

His wife, Vanessa Long, initially held hands with the Bishop as he spoke publicly about the challenges he faced. But after a year of news articles claiming Long was paying his accusers to settle out of court, his marriage recently appeared on the verge of crumbling. Vanessa reportedly filed for divorce last Thursday but immediately reconsidered her petition the next day.

In September of 2010, Eddie Long was blasted by many in the media for the hypocrisy surrounding his alleged infidelity and homosexual affairs. As an influential preacher, Long has a history of making religious and political proclamations against homosexuality and gay rights. In December 2004, Long marched thousands of his primarily African-American churchgoers through Atlanta, GA as a protest against gay marriage. His church also claims to counsel people “struggling with homosexuality,” telling them that they can be healed and delivered. And, according to the Southern Poverty Law Center, Long once preached that women deserved death for turning toward lesbianism and sex toys. 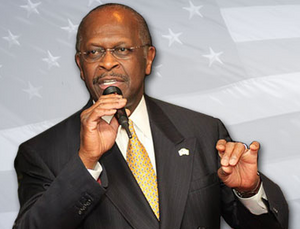 Herman Cain, the former CEO of Godfather’s Pizza, was the leading candidate for the Republican Presidential nomination just four weeks ago, beating out Mitt Romney and Newt Gingrich in a number of polls. But several women from his past came forward at the height of Cain’s popularity to accuse him of sexual harrassment. Then, another woman, Ginger White, stepped up to claim that she and Cain had engaged in a 13-year-long affair which ended only when he decided to run for president. On Saturday, the faltering candidate stood with his wife, Gloria Cain, to blame the media, his accusers and others for his personal downfall:

”These false and unproved accusations continue to be spinned in the media and the court of public opinion so as to create a cloud of doubt over me, and this campaign, and my family…. It hurts my wife, it hurts my family, it hurts me, and it hurts the American people because you are being denied solutions to our problems…. So, as of today, with a lot of prayer and soul searching, I am suspending my presidential campaign… because of the continued distraction, the continued hurt caused on me and my family — not because we are not fighters, not because I am not a fighter….”

Some media leaders like MSNBC’s Rachel Maddow and The Young Turks hammered Cain with charges of hypocrisy regarding his conservative, anti-gay beliefs and his support for Federal and state bans on same-sex marriage. On June 9, Cain told CBS News that:

“I believe homosexuality is a sin because I’m a Bible-believing Christian, I believe it’s a sin. But I know that some people make that choice. That’s their choice…. I believe it is a choice.”

He reiterated that statement on CNN, arguing with Piers Morgan that there is no scientific proof that homosexuality is not a choice. He also claimed that, while he disagreed with said choices, he did not go around bashing anyone.

In October, Herman Cain told the Values Voters Summit that marriage is between “one man and one woman” and that, unlike Barack Obama, he would actively uphold the Defense of Marriage Act. (He told bloggers in August that Obama had engaged in an “impeachable offense.”) Cain later appeared on Meet the Press to say, “I wouldn’t seek a constitutional ban for same-sex marriage, but I am a pro-traditional marriage…. [States] would make up their own minds, yes.” Days later, he changed his position claiming that marriage needed “protection” at the Federal level (The Hill):

”I think marriage should be protected at the federal level also. I used to believe that it could be just handled by the states, but there’s a movement going on to basically take the teeth out of the 1996 Defense of Marriage Act, and that could cause an unraveling, so we do need some protection at the federal level because of that, and so yes, I would support legislation that would say that it’s between a man and a woman.”