Boston Mayor Tells U.S. Mayors to “Get a Commitment” from Congress on DOMA Repeal 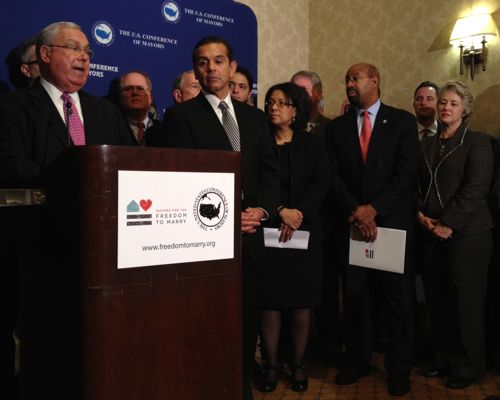 Boston Mayor Thomas Menino (D) told attendees of the winter meeting of the U.S. Conference of Mayors today that “[m]arriage for gay couples has made my city of Boston a much better place to live.”

Then, focusing on the D.C. location of the meeting, Menino added, “Unfortunately, these couples are still being discriminated against by the federal government. The Defense of Marriage Act excludes legally married couples from more than 1,100 federal responsibilities and protections.”

To the mayors, he directed them to work to repeal DOMA: “I ask all the mayors here to talk your congressmen and women, ask them to sign on [to the Respect for Marriage Act]. Get a commitment from them. This is a very important issue as we move forward.” 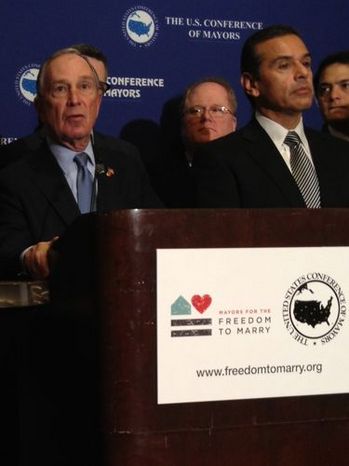 Talking with Metro Weekly after the news conference, Bloomberg said that his work for marriage equality has focused on the local level.

“In terms of talking to federal officials, other than our federal officials from New York state, I really haven’t reached out,” he said. “And I’ve not talked to the president about this, but I think he knows my views.”

Bloomberg, in fact, was recognized by the Human Rights Campaign with its National Ally for Equality Award for his work on marriage equality on the same night that Obama had earlier given the keynote speech to the group.

Although Obama already had left the HRC national dinner on Oct. 1, 2011, when the New York City mayor spoke, Bloomberg gave a stark appraisal of his view of governments that fail to recognize marriage equality. Bloomberg said, “When two people commit their lives to one another, no government should stand in the way.”

“Mostly, what I’ve tried to do is work with local elected officials. One of the concerns that I have is to make sure that those who voted for changing the law in New York state get re-elected, both Republicans and Democrats. For the Republicans, it was probably a bigger lift, and there were four of them,” he said. “The good news is they are being well supported by a lot of people, me and lots of other people. I think it shows you can vote your conscience, even if sometimes some of the pressure that people bring is on the other side.”

Outside of New York, he added, “I’ve tried to support people around this country — local legislators’ levels — who are my position on this, and guns, the environment, the education and that sort of thing.”

Among the mayors to speak at today’s Freedom to Marry news conference were Tacoma, Washington, Mayor Marilyn Strickland, who spoke about the importance of her state’s legislators voting to approve marriage in this session, and San Diego Mayor Jerry Sanders (R), who spoke about his “evolution” to support of full marriage equality.

D.C. Mayor Vincent Gray (D) is a signatory to the pledge, saying in a statement today, “These loving and committed couples have been prevented from sharing in the critical safety net of protections associated with marriage for far too long, and laws preventing gay people from marrying are both unjust and harmful to any society that values family, commitment and stability.”