Cynthia Nixon comes out again as “bisexual,” but in a gay relationship

For reasons all her own, actress Cynthia Nixon has given the Advocate magazine a clarification about her sexual orientation. She has been under pressure since a controversial remark she made to the New York Times seemed to indicate that being gay is “a choice” for some. 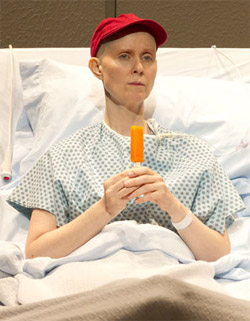 In her latest statement, Nixon still maintains that people shouldn’t be “pigeon-holed into one cultural narrative,” but she does acknowledge:

“While I don’t often use the word, the technically precise term for my orientation is bisexual. I believe bisexuality is not a choice, it is a fact. What I have ‘chosen’ is to be in a gay relationship.”

She went on to say that she does not believe people choose the gender of the individuals they are attracted to — not in “our community” and not for “the majority of heterosexuals.”

Nixon has been criticized by many people for confusing the issue of sexual orientation on both personal and sociopoliticial levels. In an Jan. 19 interview about her new role in the play “Wit,” Nixon told a New York Times reporter:

“For me, [being gay] is a choice. I understand that for many people it’s not, but for me it’s a choice, and you don’t get to define my gayness for me.”

Several days later, she told a writer at The Daily Beast that she was bisexual, but she didn’t care for that particular word as a label. And she insisted that her change from male partners to a female partner did not indicate she had been “walking around in some kind of fog”:

Most media attention focused solely on her NYT statement, though, and she received a mixed reaction from both fans and her fellow celebs. Joy Behar, Barbara Walters, and chef Cat Cora all said it was “dangerous” of her to use such phrasing. Others were more sympathetic, like Harvey Fierstein, who wrote: “Would people please get a life and leave thd lady alone.”

Nixon had her first public coming out as being in a same-sex relationship back in 2004. At first she was coy, saying:

“My private life is private… I have nothing to hide. So what I will say is that I am happy.”

In 2008 she told Oprah Winfrey that she had been “pretty shocked” to fall for a woman, but explained her same-sex attraction cheekily with, “You haven’t met my girlfriend.”

In the last couple of years, she has become a full-fleged activist for gay marriage equality — making a speech at the 2009 March on Washington, a PSA for marriage rights in New York, another speech where she announced her engagement to Christine Marinoni, and even sat next to Brian Brown of NOM to argue very successfully against his notion that gay marriage is “redefining marriage.”

Now that she has redefined herself with more “acceptable” terminology, you may want to catch her on stage in “Wit.” She plays an ovarian cancer patient in that Broadway play. Nixon is appearing at the Samuel J. Friedman Theatre, 261 West 47th St., NYC.

Third-round 2016 draft pick posts video of his coming out moment to Instagram and pledges $100,000 to The Trevor Project.

Carl Nassib, a defensive end for the Las Vegas Raiders, came out as gay, making him the NFL's only openly gay player. If he survives roster cutdowns following training camp later this summer, and he could eventually become the first openly gay player to start an NFL game.

"I just want to take a quick moment to say that I'm gay," Nassib said in a video shot at his house in West Chester, Pennsylvania and posted to his Instagram account. "I've been meaning to do this for a while now but I finally feel comfortable enough to get it off my chest.

"I really have the best life," Nassib continued. "I've got the best family, friends and job a guy could ask for. I'm a pretty private person, so I hope you guys know I'm not doing this for attention, but I think representation matters."