Maryland Governor O’Malley: “We Must Choose Words and Laws” Of Compassion 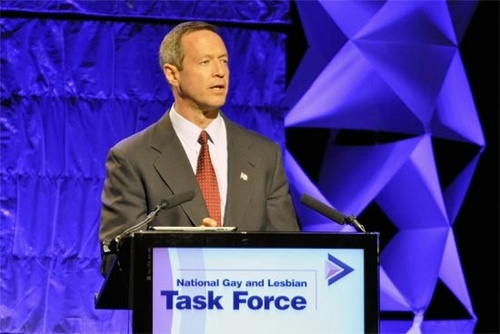 O’Malley began by talking about the state’s history of addressing human rights and dignity. He said that during the Revolutionary War, 60 percent of Marylanders fighting against the British were Native Americans and one in five were black — some free, most slaves. Since Maryland joined the union as a refuge for religious liberty and individual conscience, he said, the state’s history compels it to continue forging into its laws the inalienable rights and dignity of every individual.

After recounting the recent extensions of hospital visitation and end of life decision-making to same-sex couples, he reaffirmed the necessity for LGBT people to be able to own property and work without penalization for their sexual orientation and gender identity.

He went on to say that part of human dignity was “[t]he dignity of a free and diverse people who at the end of the day, all want the same thing for their children: to live in a loving and caring and stable home that is protected equally under the law.

O’Malley then mentioned his civil marriage bill — which could make Maryland the seventh marriage equality state in the U.S. — while underscoring the bill’s religious freedom protections and recognition of individual rights.

In what was perhaps an oblique reference to his wife’s having called the state’s anti-marriage legislators “cowards,” O’Malley said, “When we use words of hurt and fear instead of love, understanding and compassion… when this occasionally happens, we must have the humility to apologize. We must choose words and laws of understanding, compassion and justice.”

Pledging his conviction to help legalize marriage equality in Maryland this year, O’Malley then thanked the conference and departed.