Three important state legislators helped to rally support for Maryland’s same-sex marriage bill on Sunday, Jan. 29, at a church in the city of Frederick.

Delegate Galen Clagett, Senator Ron Young, and Senator Rob Garagiola (all Democrats) were joined by Attorney General Doug Gansler. Together they addressed a capacity crowd of 200, most of whom were there to represent a diverse set of religious groups. The sponsoring coalition was called Congregations United for Marriage Equality, and representatives from another organization, Marylanders for Marriage Equality, were also in attendance. 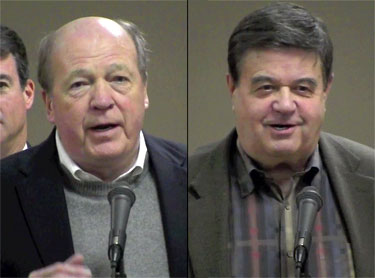 Galen Clagett (D-Frederick Co.) told the crowd that he was a sponsor of the House bill in 2011, and that he again signed onto the 2012 House bill earlier this week. He spoke of his past advocacy for racial equality and for the mental health community, adding that he was not afraid of change. He specifically noted that “19 Tea Party members of the 43 Repbulicans,” two of which were “in our Delegation…. don’t want change. But we will prevail this time.”

Senator Ron Young (D-Frederick and Washington Cos.) said it he and Clagett seemed to be the “only two in the five Western Maryland Counties that did vote for” the 2011 bills in the House or Senate. He challenged attendees to contact and convince their lawmakers to vote for the same-sex marriage bills, “particularly in the House.” He related his personal history to the notion that marriage will be destroyed by inclusion of gay couples:

“I was divorced, and I hear people say that same-sex marriage will destroy marriage. Actually, I guess divorce destroys marrige more than two people that really want to be together.”

Young predicted “a tough road in front of us.” He evidenced this with his inability to convince “the two young women from Prince George’s County” to “come over” to his side. He also relayed the surprising story of a Democrat from Western Maryland who wanted to rally churches to, not support gay marriage, but to “throw out all the people who voted for same-sex marriage.”

Rob Garagiola (D-Montgomery Co.) did not deliver a speech at the event, but did Tweet about it afterward, saying: “Good to see MD Dems united.”